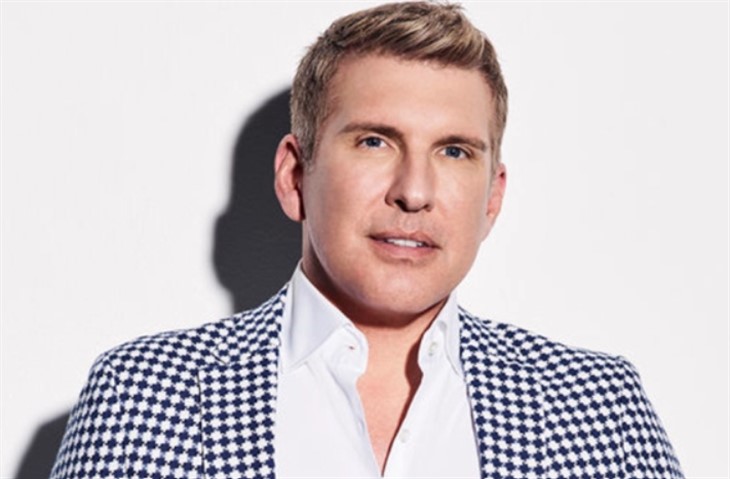 Todd Chrisley, the dad of Lindsie and patriarch of Chrisley Knows Best allegedly started threatening Katie Joy, of the Without A Crystal Ball podcast. Well, she finally issued a letter to his attorneys telling him to cease and desist. It’s all being boiling away for a while now, but clearly, she’s over what she feels is extortion, defamation, and more.

Todd Chrisley And Lindsie Chisyley In The Headlines

Recently, Todd has been in the headlines, as has Lindsie. USA Network fans heard that Lindsie filed for divorce from Will Campbell. Well, a lot of people felt sad that she didn’t manage to make her marriage work, but they sent in messages of support. At the time, Lindsie said that they split fairly amicably, and they intend to work together to make sure that their son Jackson gets quality time with both parents. Well, it turned out that Todd doesn’t actually stay in touch with Lindsie since they became estranged years ago. However, he seems to have someone monitor her social media.

Todd Chrisley took to his Instrgam and on his Chrisley Confessions podcast and discussed the divorce. Actually, he said that he hates how his own divorce from his first wife messed up his son Kyle and his daughter Lindsie. So, he seemed very concerned about the effects on his grandson, Jackson. Plus Todd said that he spoke out about it as he received a lot of requests from the press for a statement. So, he went onto social media so it couldn’t be twisted. Amidst all the drama, he apparently also took aim and fired at Katie Joy who runs her Without A Crystal Ball podcast.

Todd Chrisley Gets Cease And Desist From Katie Joy

Todd and Katie Joy apparently clashed as he feels that she sides with Lindsie. Well, it’s been sniping and allegations of growing threats since then on social media. Actually, it seems to have escalated into an all-out feud, and allegedly, Todd bad-mouthed Katie and her husband on his podcasts. Now, Katie’s sick and tired of it all and said that she has been in contact with attorneys. On Friday, August 6, she shared a long post about it on her Instagram.

The independent journalist shared a card about Todd Chrisley. It read: “Today we served Todd Chrisley’s attorneys with a Cease & Desist for Defamation, Extortion & Tortious Interference for threats he made over the past three weeks.” She added, “It’s against the law to threaten to destroy someone unless they provide private information.” Finally, she noted, “Extortion is a Felony.” Well, she went into a lot more detail in her caption. Katie wrote about how she alleged Todd wants her to hand over private information from conversations she held with Lindsie. Plus she elaborated on the alleged threats she received from him.

It looks like for now, Katie Joy hopes that Todd just backs off of her. Her caption also clearly stated that they have not filed a report with the FBI yet. Plus, she dug in her nails by ending with, “We take these threats seriously as Mr. Chrisley is on bond for Federal charges related to a 9 count indictment.” 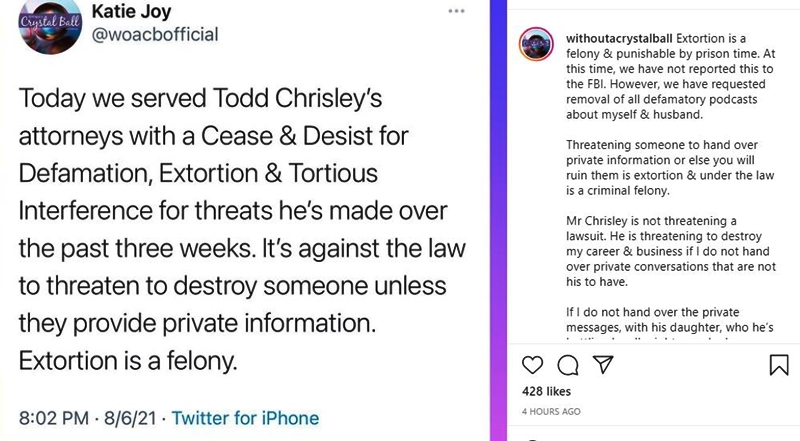 Actually, a few fans felt that what they heard on his podcast seemed rather threatening, One of them noted, “I found myself listening to his remarks at several Chanel’s (sic) while trying to do accounting work and I thought I heard threats. 😮”

Remember to check back with us often for more news and updates about Todd Chrisley from Chrisley Knows Best on the USA Network.