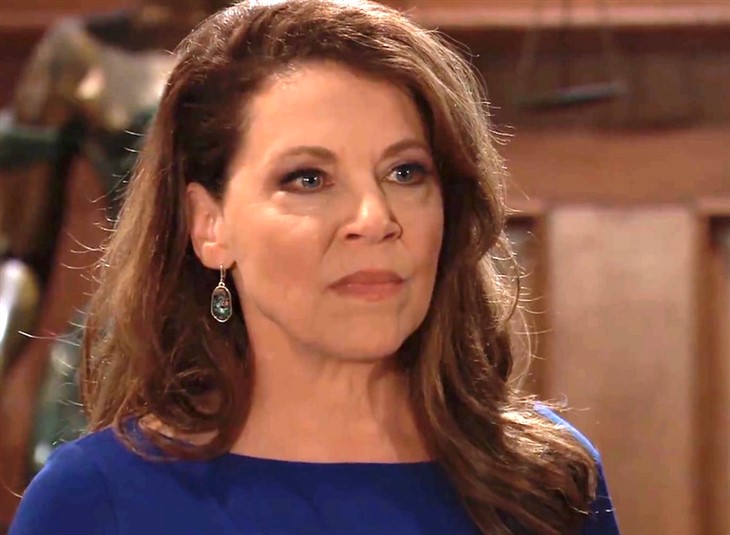 General Hospital viewers will recall that Dr. Hamilton Finn (Michael Easton) and Nurse Elizabeth Baldwin (Rebecca Herbst) thought that Peter was dead when they stuffed him into that morgue freezer! Yet, when Finn confessed to Anna Devane (Finola Hughes) what had happened, and Elizabeth confessed to Jason Morgan, (Steve Burton) either Popsicle Peter thawed and melted down the drain or someone moved the body before Jason had a chance to, or worse yet, Peter was alive and had left the scene! There was, as General Hospital viewers will recall, that scene of a bloody Peter walking towards Elizabeth on the roof of the hospital shortly afterwards, but presumably, that was Elizabeth’s guilt talking. If it had really been Peter and he had survived, he certainly would have killed her right then and there!

General Hospital viewers know that Liesl would want to avenge Franco Baldwin’s (Roger Howarth) death, not only for herself, but for her boyfriend Scott Baldwin (Kin Shriner). General Hospital viewers will remember that Scotty has lost all but one of his children to death over the years, and Liesl grieves not only Franco’s loss for herself, but for Scotty. Scott would certainly not advise Liesl to bring Peter to justice on her own, but he didn’t know her personally back when she lost her own son, Nathan West (Ryan Paevey) several years ago, also at Peter’s hand. General Hospital viewers will remember vividly what Liesl did to Peter to avenge Nathan, and she may well do the same or worse to Peter now, should she get her hands on him!

General Hospital Spoilers And Rumors – Never Underestimate The Anger Of A German Mother Who Has Lost Her Child!

General Hospital viewers know that the anger of a German mother who has lost her child should never be underestimated, even if the “child” in the case of Franco wasn’t her blood child. When Nathan died, Liesl snuck up behind Peter in his Metro Court suite, knocked him out, and dragged him unobserved from the hotel, after which she bound and gagged him and tied him to a bed in a cabin in the woods! Much like the Stephen King novel “Misery”, Liesl took out her revenge on Peter by torturing him and withholding food and water, and if a friendly boy scout hadn’t come upon him, he’d have never survived! Even then, Liesl then moved him to the Cassadine stables and nearly burned up her niece Nina Reeves (then Michelle Stafford, now Cynthia Watros) along with Peter! General Hospital viewers will recall that if Valentin Cassadine (James Patrick Stuart) and others had not arrived in time, both Peter and Nina would be dead – although Valentin probably wishes he’d left Peter in the burning barn now!

If, as General Hospital viewers theorize, Liesl found Peter still clinging to life in that morgue freezer, she may have recreated her revenge for Nathan’s death! That means she would have singlehandedly dragged him out of the sub-basement, possibly knowing another way in – there are tunnels and catacombs under Port Charles, after all – and took him to either the same cabin or maybe another one she knows of. Liesl could have known of and opened up the passageway from Helena Cassadine’s (Constance Towers) old lab that led to tunnels under the city and got Peter out that way. Anger can give a person enough adrenaline to accomplish what is needed, including a small woman knocking out and dragging a large man to a cabin, as General Hospital viewers will recall she did before!