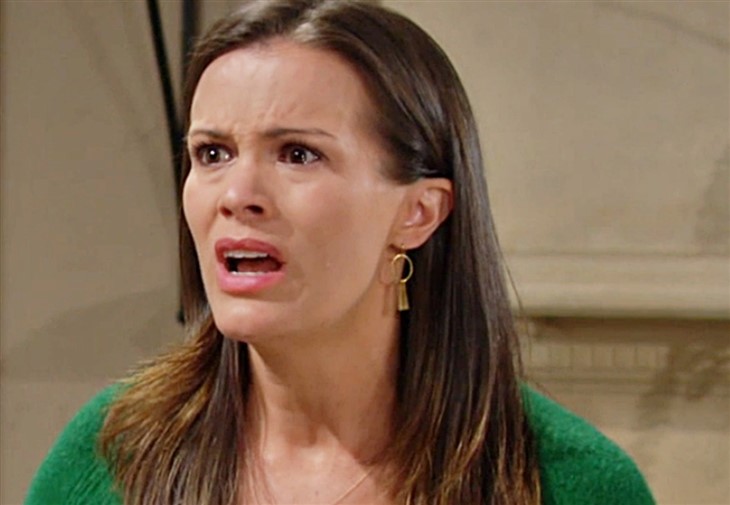 The Young and The Restless (Y&R) fans raise your pinky fingers in the air. It is spoiler tea time. I do not know about you guys and gals but as for me, I must admit Chelsea Lawson ( Melissa Claire Egan) is really good with the con because now she has got ME scratching my head wondering if she or is she not? I’m asking myself, is it real or is it ChelseaCon? After all, girlfriend did fall and hit her head while she was trapped in the elevator at Chancellor Communications. She later started having delusions about Adam Newman ( Mark Grossman ) while she was at home and now at the psychiatric facility, she is still hallucinating and spazzing out about Adam and not in a good way.

The spoilers are implying that Chelsea will continue this downward spiral until she finally hits Bonkersville. She will finally come to understand that she has really had a mental breakdown and hopefully (after her real-life maternity leave is over) she will work hard to heal, forego any prison time for her poisoning antics, and be accepted back into the good graces of the Genoa City residents. Who knows, could there still be a chance for her at a renewed relationship with Adam…?

The Young And The Restless Spoilers Sharon And Nick Newman Take the Long And Winding Road Back To each other.

Can you see how the writers are using the concerned parenting angle to keep putting Nick Newman’s ( Joshua Morrow ) and Sharon Rosales’s ( Sharon Case) heads together while their daughter Faith Newman ( Reylynn Castor) is on the mend? They are not only sharing scenes with each other they are sharing things with each other about their relationships. The spoilers are teasing that Phyllis Summers ( Michelle Stafford ) in the near future will resume her role as a GC joint being passed around to yet another set of lips. Rey Rosales ( Jordi Vilasuso ) will soon become just a warm memory in Sharon’s mind. He will either leave GC or find another love (now I wonder who that could be)? The spoilers are also hinting that Noah Newman ( Robert Adamson IV ) might be coming back to Genoa City. What a family affair that will be!

The spoilers are hinting that she is. They are saying Sally Spectra ( Courtney Hope ) will continue to nurture a friendship with Tara Locke ( Elizabeth Leiner ) in hopes of teaming up to end Summer Newman’s ( Hunter King ) and Kyle Abbott’s ( Michael Meanor ) relationship. And all the while she will be dropping dimes and precious pearls of information to Tara’s estranged husband Ashland Locke ( Richard Burgi) about all she can find out about Tara’s custody plans. Sally will double her pleasure by getting revenge on Summer and securing her dream career through Ashland for her services.