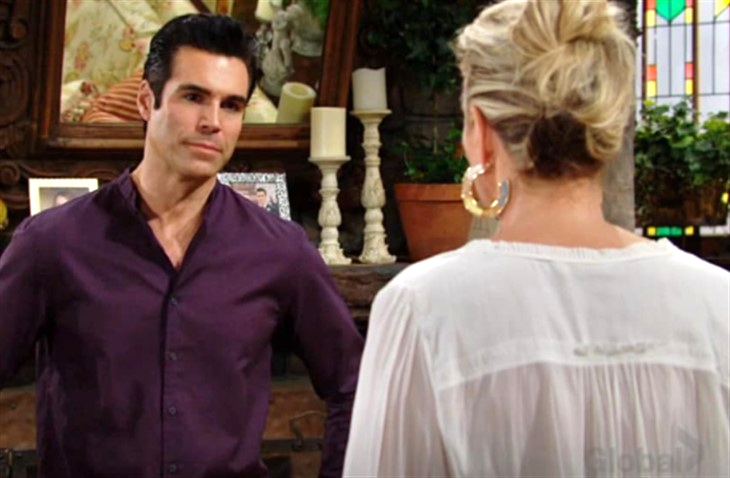 The Young and the Restless (Y&R) spoilers for Wednesday, June 9, 2021, reveal Sharon and Rey doing their best to set their marriage on course.

Sharon (Sharon Case) and Rey (Jordi Vilasuso) agreed to put their problems behind them and not end their very young marriage, so it’s time for a second honeymoon when the first honeymoon was less than six months ago. But can they forget the fact that Sharon kissed Adam (Mark Grossman) and lied to Rey about where he was, breaking the law along the way?

Rey says he can move on but he’s still dedicated to finding out what really happened with Chelsea and why she wanted revenge on Sharon and Adam so badly. He finds it hard to believe Chelsea just had a nervous breakdown. He also finds it hard to believe Chelsea (Melissa Claire Egan) had just recovered from a stroke and was working on her own. Will he dig up anything that can hurt his marriage? And will this also hurt Chloe (Elizabeth Hendrickson)?

Y&R Spoilers – Adam Newman And Victor Newman Have A Plan

Adam and Victor (Eric Braeden) are all about getting along and being a father-son team in the business. Victor would also like his oldest son to be involved as he’s dreamed of Adam and Nick (Joshua Morrow) not hating each other for years. He finally got his wish. Adam and Nick even tried watching baseball together. Now, The Great Victor Newman wants more.

To that end, Victor and Adam meet with Nick and Phyllis (Michelle Stafford) on Wednesday and have a proposal about New Hope. This is Nick’s project, but it was also Adam’s mother’s name, so maybe Nick might want to hear them out.

The Young And The Restless Spoilers – Nikki Newman Takes Charge

Adam apparently has a very busy day as Nikki (Melody Thomas Scott) takes the time to confront him and give him a warning. She still doesn’t trust Adam and he hasn’t given her too much reason to trust him over the years. She tells him he better be on the up and up now because if he hurts Victor, he will have to answer to her. Stay tuned to The Young and the Restless weekdays to see how these stories play out.