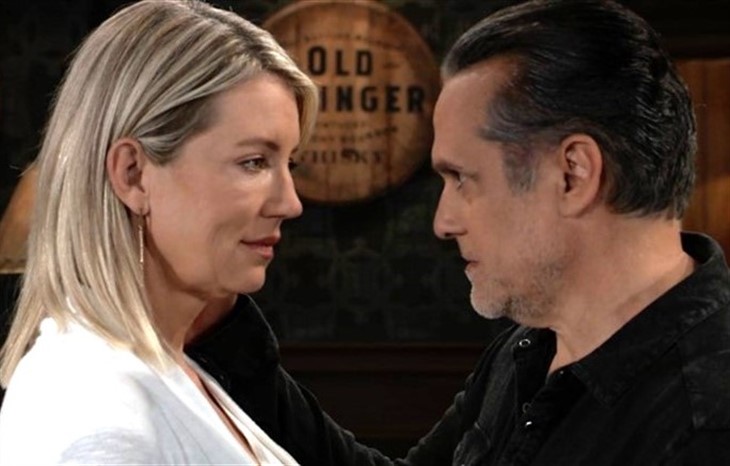 General Hospital (GH) spoilers for Wednesday, June 9, 2021, reveal Nina having a huge decision to make when Michael has a proposition.

Nina (Cynthia Watros) left Port Charles after Michael (Chad Duell) and Carly (Laura Wright) forbade her to see Wiley because she blabbed and told Wiley who his biological mother was. Not that Wiley was old enough to understand any of it, but Nina didn’t mean to hurt anyone. She then ran into Sonny (Maurice Benard), realized he had amnesia, and decided to stay in Nixon Falls and keep Sonny from knowing who he really is. Then she felt for the man she calls Mike. And he fell for her.

Now, Michael has been forced to change his mind thanks to Jax (Ingo Rademacher), and Nina can see Wiley if she comes home to Port Charles. Nina is thrilled she’ll finally have a chance to know her grandson but she doesn’t want to leave Mike for good. She asks him why her trip has to mean goodbye. But once she’s in PC, will she be able to tear herself away from Wiley?

It looks like Finn’s (Michael Easton) scientific skills paid off and he found more than just a temporary antidote to Chase (Josh Swickard). He found the cure. He calls Jackie (Kim Delaney) and Gregory (Gregory Harrison) to the hospital to tell them that Chase is on the mend.

Will Willow (Katelyn MacMullen) have the guts to tell Chase she wants to be with Michael once she sees his health start to improve?

Now that Jason (Steve Burton) is free and Liesl (Kathleen Gati) tracked her down, Britt (Kelly Thiebaud) returns to PC and the hospital. She immediately goes to visit Maxie (Kirsten Storms) and asks her if she went ahead with her plan to pretend her baby died. Will Maxie tell her how it all went awry and she went to plan b and told everyone her baby was kidnapped? Will she also tell her where Louise really is.

Elsewhere at GH, Liesl tells Anna (Finola Hughes) she can let out her frustrations about Peter (Wes Ramsey) to her. Liesl gets it and would love to bash Peter. Will Anna finally scream about this monster she thought was her son? Stay tuned to General Hospital weekdays to see how these stories play out.