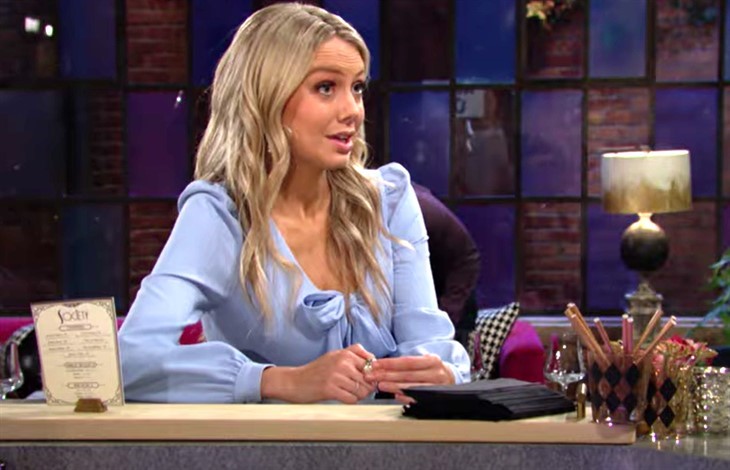 The Young and the Restless (Y&R) spoilers for Friday, June 18, 2021, reveal in Los Angeles Christine Williams paying a visit to Abby Newman with some fascinating news.

The Young And The Restless Spoilers – Will Abby Newman Get A Real Clue?

Newlywed Abby (Melissa Ordway) has spent months alone not knowing where her new husband even is. Despite this, she plodded along with her baby-making plans, using her egg and Devon’s (Bryton James) sperm to create an embryo that Mariah (Camryn Grimes) will house in her uterus for nine months.

That doesn’t mean she hasn’t been lonely, stressed, and completely overbearing, insisting that Mariah and Tessa (Cait Fairbanks) move into the Chancellor mansion with her. She has also sat around most days knitting and doing needlepoint with her mother-in-law, Nina (Tricia Cast), grasping for any word from Chance to tell her he’s still alive but not tell her where he actually is. But, it’s a little grain of something right? It’s what Abby is holding onto at this point.

On Friday, Lauralee Bell makes a rare appearance as Christine and she has some news for Abby about her husband. Does she know where he is? Might Chance be in more danger than Abby imagines? Will he be coming home soon? These are things Abby and Nina both need to know. Will Christine provide the answers they’re looking for?

Y&R Spoilers – Jack Abbott Has Some Words For Kyle Newman

Now that Kyle (Michael Mealor) knows he is a father and gets to play the role of Daddy, his own father has a few things to say to him. Kyle has spent many years being irresponsible, and as we now know, he now got a married woman pregnant during a summer fling and never even knew.

Now Jack (Peter Bergman) is there to give him some fatherly advice on being a father on Friday, something Kyle might need as he stumbles through this new chapter in his life. But is Jack really one to talk? He wasn’t there through most of Kyle’s childhood and he has another son out there that he didn’t know was an adult who we haven’t heard from in decades. Where is Keemo anyway and does he still consider Jack a good dad? Stay tuned to The Young and the Restless weekdays to see how these stories play out.