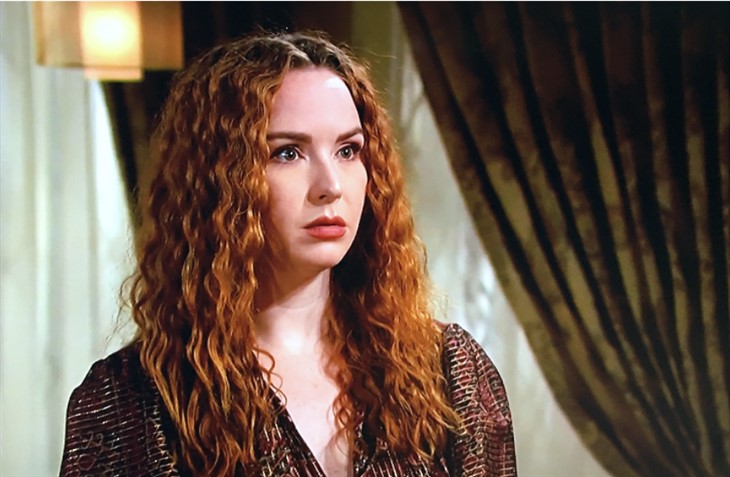 The Young and The Restless (Y&R) spoilers tease that Mariah Copeland (Camryn Grimes) will adjust to her new pregnant normal in upcoming episodes of Days of Our Lives!

Viewers of The Young and The Restless will remember that while Mariah was ecstatic when she found out that Abby Chancellor’s (Melissa Ordway) embryo transplant “took”, her partner Tessa Porter (Cait Fairbanks) had to suddenly go on the road again! Tessa is expected to be gone for several months, and while Mariah gave Tessa her blessing, now she is adjusting to her new pregnant normal by herself! Mariah has plenty of support, and Abby is waiting for Chance Chancellor (most recently Donny Boaz) to come home for a mission too, so the two of them have even more in common than the baby!

Mariah knows what she might expect – she has studied up on pregnancy and so has Abby, and then there is plenty of motherly advice from Ashley Abbott (Eileen Davidson), Nina Webster (Tricia Cast) and her own mother, Sharon Rosales (Sharon Case). Mariah knows that she can call on any one of them if need be and they will be there for her. But the physical and hormonal changes are starting already, even though the pregnancy is brand new. She’s starting to have morning sickness, although she is thankful it is minor and easily handled with a few saltine crackers. Mariah knows that hormonal changes are already beginning as well, and that she could be more sensitive, more crabby, and her ankles might swell. Viewers of The Young and The Restless who have children know that it’s basically the same kinds of hormonal symptoms many women get with premenstrual syndrome so it’s not really scary, it’s just that she wishes Tessa was by her side through all this!

Viewers of The Young and The Restless will recall that Mariah and Tessa have spoken of having a child – by artificial insemination – together in the past. Same-sex couples have to go that route, and in the case of men have to naturally have a surrogate. There would be discussions of who would be the father or who would be the mother, or maybe both people in the couple could be the father or the mother donors and switch off. Mariah is at home while Tessa has a blossoming music career on the road so Mariah is the natural choice to be the carrying mother for their children.

The Young And The Restless Spoilers: A Worried Jack Learns Jabot Has Been Targeted #yr #youngandrestlesshttps://t.co/OL1xcATtKF

As she thinks about the nine or so months ahead, she dreams of a baby of her own and Tessa’s. She knows that she has to not become overly attached to the baby she is carrying now, because this baby is Chance and Abby’s. Devon Hamilton (Bryton James) is rather in a similar position being the sperm donor and he and Mariah get together and talk. They both want children of their own someday, of course. Devon talks about Hilary Hamilton’s (Mishael Morgan) death when their child died with her, and it was a double tragedy. They both agree this new normal is one both of them will have to get used to – being a part of the life of the baby they created together, but not really parenting him or her.