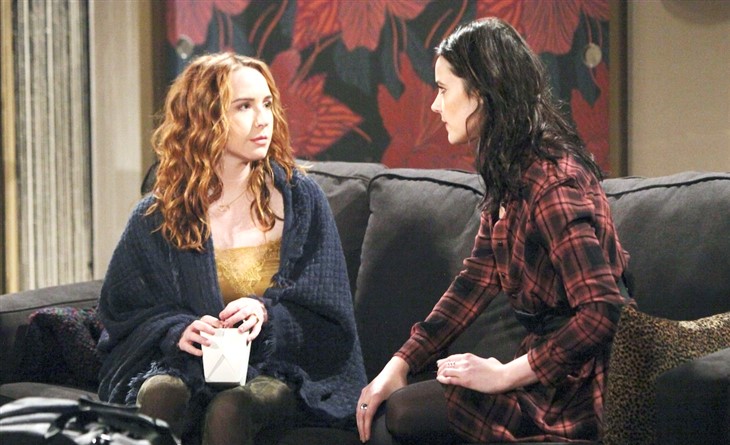 The Young and the Restless spoilers reveal Mariah Copeland and Tessa Porter continuing to have troubles as Mariah still can’t shake the PTSD she is feeling after being locked up in a room alone and pregnant for weeks. She also seems to have a bad case of postpartum depression and is not getting the help she needs. Do these two need a break for a while? You tell us!

The Young and the Restless Spoilers – What Can Tessa Porter Do?

Tessa (Cait Fairbanks) has been trying to be the dutiful girlfriend and be as supportive of Mariah (Camryn Grimes) as possible, but she also couldn’t give into Mariah’s every whim and told her point-blank she is not ready to have a baby of their own right now as Mariah wants and desires.

This has caused Mariah to go cold on Tessa, pretending to sleep while denying affection, and refusing to go to Italy with her in case Bowie/Dominic somehow needed her or her milk despite Abby Newman (Melissa Ordway) saying she was weaning the baby and putting him on formula. When Tessa gave Mariah a call back in Genoa City, Mariah made an excuse and got off the phone as fast as she could. Is this a sign that Mariah and Tessa need some time away from each other to re-evaluate their lives and relationship?

Should Tessa continue to just be there for Mariah no matter how much she hurts her right now? After all, Mariah went through quite the ordeal and was not prepared for how she would feel when she was forced to hand this baby over to Abby. Maybe it would have been easier for her if she hadn’t been locked up with only the baby in her belly as company, but that’s not what happened and Tessa needs to understand where Mariah is coming from — and maybe she sees a therapist who is not her own mother.

Mariah’s brother, Noah Newman (Rory Gibson), might complicate matters as he clearly still has feelings for Tessa, despite Tessa admitting she is definitely gay. Should Mariah and Tessa split and let the chips fall where they may for a while or should they stick together through all this heartache? Let us know in The Young and the Restless poll below.