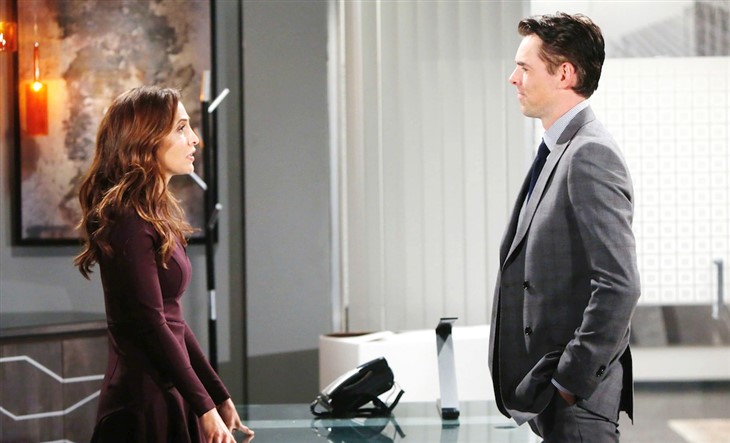 The Young and the Restless (Y&R) spoilers for Wednesday, October 27, 2021, reveal Billy Boy Abbott and Lily Winters realizing they need to save ChanceCom as soon as possible.

Realizing they fell right into Victor Newman’s (Eric Braeden) trap, Billy (Jason Thompson) and Lily (Christel Khalil) feel they are on the verge of losing everything they worked so hard for over the last year. Newman Media wants ChanceCom and Victor will stop at nothing to get it. He also has Adam Newman (Mark Grossman) on his side and Billy and Lily know that can only mean trouble.

Not knowing where else to turn, the pair visits Victoria (Amelia Heinle) and asks her to help them out with Daddy. Surely, she can’t be that angry at Billy for trying to ruin her wedding. After all, let bygones be bygones right. This is business and Victoria has influence over Victor — or so they think. Will Victoria even want to do anything for these two?

Rey Rosales (Jordi Vilasuso) still hates Adam with the fire of a thousand suns and so does Kevin Fisher (Greg Rikaart). Sadly for them, their wives don’t have him at the bottom of their list of people to like. Chloe (Elizabeth Hendrickson) is oddly now working for Adam despite trying to kill him countless times after he accidentally killed her little girl in a car accident.

As for Sharon (Sharon Case), she will always defend and seemingly understand Adam even if she isn’t madly in love with him. That makes Rey and Kevin commiserate with one another on Wednesday. Will they decide to do anything to change Adam Newman’s life trajectory?

The Young And The Restless Spoilers – Abby Newman Is Devastated

Abby Newman (Melissa Ordway) is still trying to hold onto hope that Chance Chancellor is alive but it’s looking more doubtful as each minute passes. Clearly, Christine (Lauralee Bell) and Ashley (Eileen Davidson)are keeping something from her and she is not sure what.

She is also walking around in a haze, wondering what to do with this baby she only wanted so she could have a family with Chance. Stay tuned to The Young and the Restless weekdays to see how these stories play out.