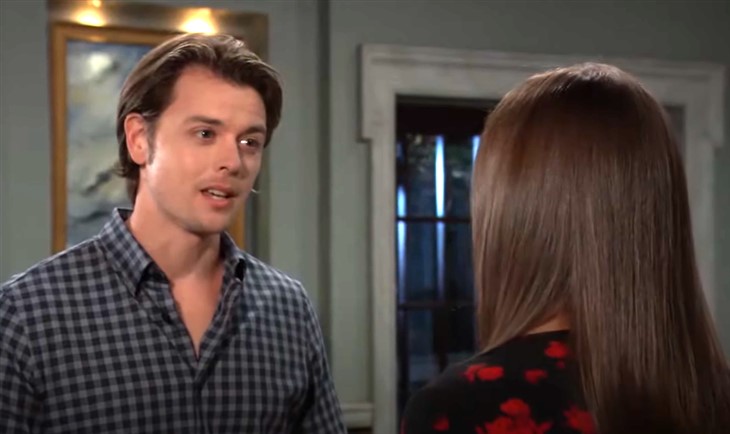 General Hospital Spoilers tease that Willow Tait (Katelyn MacMullen) and Michael Corinthos (Chad Duell) might be about to face their first real obstacle as a couple. Michael is usually quite level-headed but he can only be pushed so far. Meanwhile, Willow is what Carly Corinthos (Laura Wright) called a “fixer”. Willow wants to keep the peace at all costs. But the situation with Nina Reeves (Cynthia Watros) may be beyond “fixing”.

As viewers know, Nina discovered that Sonny Corinthos (Maurice Bernard) months ago, but had amnesia. Rather than let his family know, Nina chose to let them grieve, with the excuse that Sonny seemed happier with his newfound life in Nixon Falls. But Michael is furious at the pain Nina caused his family and although he appeared to let Willow talk him down, he contacted the Attorney General in Pennsylvania in order to get them to pursue a criminal case against Nina.

Willow doesn’t think Michael should take any action against Nina himself. She believes that Nina will come out smelling like an innocent victim. And arresting Nina may not be the best thing in the long run for Wiley Corinthos (Caleb and Kyler Ends). Both of them are right, so will they be able to come together for Wiley’s sake. But Michael may have made that more difficult than he needed by keeping Willow out of the loop.

General Hospital Spoilers – Michael Corinthos Is Out For Blood

While Willow is just as angry as Michael about Nina, she doesn’t see how going after Nina is going to help anything. And the fact that Michael has hidden his plans from her won’t sit well with Willow either. Although this isn’t a huge obstacle, it may start to show cracks in their relationship. Michael is obviously becoming more ruthless, as one can tell by his praise of Brook Lynn Quartermaine (Amanda Setton) on how she handled Dr. Austin Gatlin-Holt (Roger Howarth). Perhaps Michael and Willow aren’t as perfect for each other as they originally believed.

Will Michael go through with his plans for Nina? How will Willow react to be kept in the dark? Is this the beginning of the end of their relationship? Only time will tell, so stay tuned to General Hospital airing weekdays on ABC. And don’t forget to check back right here regularly for all your General Hospital news, information and spoilers!