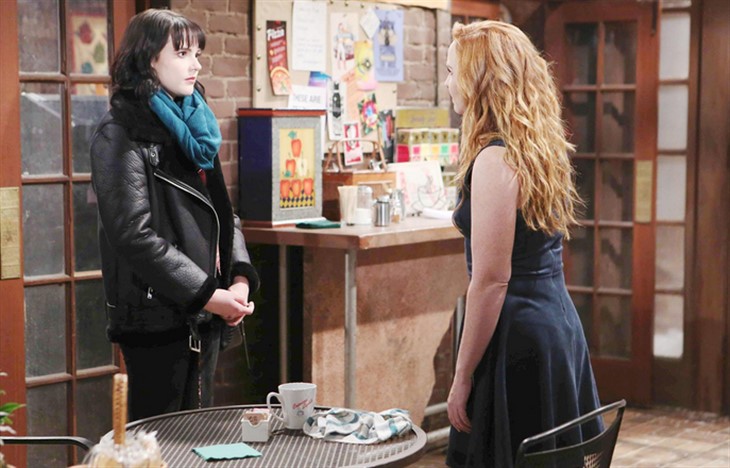 The Young and the Restless (Y&R) spoilers and updates tease that Mariah Copeland (Camryn Grimes) will insist that she and Tessa Porter (Cait Fairbanks) should have a baby of their own.

The pair decides to move out of the Chancellor’s mansion. Mariah has decided to stay away because she’s struggling to let go of baby Bowie. She knows that she’s a surrogate and once she gives birth to the baby, she needs to give it to Abby Newman-Abbott-Chancellor (Melissa Ordway). But after carrying the baby in her belly for months, talking to him and protecting him, Mariah has developed a strong bond with the child.

Abby is willing to do whatever she can to make it easier for Mariah but they all know she can’t do anything. That’s why Mariah has decided to leave. Until she becomes stronger and learns to accept their situation, Mariah will have to keep their distance from Dominic Newman-Abbott-Chancellor for now.

Mariah and Tessa will be staying at The Grand Phoenix temporarily. The latter is extremely worried about her partner but she’ll have to deal with another challenge.

In the preview video for next week’s The Young and the Restless episode, Mariah will tell Tessa about “a path forward.” She’ll then suggest for them to have a baby of their own, a recommendation that will catch Tessa off guard. Tessa wants Mariah to focus on healing and moving on. She’s concerned that she’s dealing with her problem the wrong way. She doesn’t believe that having a baby will fill the void that she’s feeling right now.

Aside from that, Tessa may point out that they’re still working on their careers. They’re not financially ready to have a baby unlike Abby and Chance Chancellor (last played by Donny Boaz). There’s also the issue of getting married first before they start a family. As expected, Mariah won’t be too welcoming of Tessa’s explanations but the latter will try to be as supportive and understanding as possible.

Elsewhere, Devon Hamilton (Bryton James) will take his relationship with Amanda Sinclair (Mishael Morgan) up a notch. He’ll ask her to move in the penthouse and it seems like Amanda is open to the suggestion.

As for Ashland Locke (Richard Burgi), he’ll meet the man behind the cryptic messages he’s been receiving. He’ll talk to Jesse Gaines (Jamison Jones), who will demand $3 million in return for his silence. Is Ashland desperate enough to pay him off to keep his secrets buried for good?