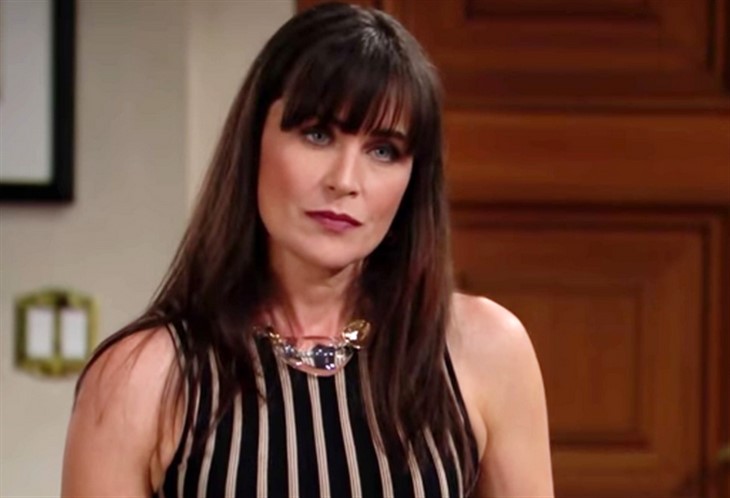 The Bold and the Beautiful spoilers reveal that Quinn Forrester (Rena Sofer) is still thinking about Eric Forrester (John McCook). The idea of him being with another woman is unbearable. She has spied on Eric before, so she could do it again during Steffy Forrester’s (Jacqueline MacInnes Wood) wedding. Could the mystery wedding crasher be Quinn in disguise?

The Bold And The Beautiful – Fixated On Eric Forrester

B&B spoilers reveal that when Quinn’s marriage was back on track, all she could think about was Carter Walton (Lawrence Saint-Victor). Now that the Forrester patriarch is filing for divorce, “Quarter” is secretly in each other’s arms. After engaging in passion, Carter looked like he was falling in love. Quinn decided that was the right moment to bring up her soon-to-be ex-husband. She admitted that it would kill her if Eric was with another woman and she wanted to find out for sure.

During the week of August 2, Steffy and John “Finn” Finnegan (Tanner Novlan) will get ready for their wedding. It is being held at Eric’s mansion and Steffy has requested that Stephanie Forrester (Susan Flannery) be honored. Eric agrees to the request and places Stephanie’s portrait where Quinn’s used to be.

On the day of the wedding, there will be a mystery woman who shows up. We know it’s not Finn’s mother, Li Finnegan (Naomi Matsuda) because she is invited to the ceremony. Plus, Li debuts on Monday while the mystery woman shows up on Thursday.

The Bold And The Beautiful  – Quinn Forrester Spies In Disguise?

The Bold and the Beautiful spoilers reveal that the mystery woman causes a lot of tension at the “SINN” wedding. However, Steffy and Finn continue exchanging vows and celebrate becoming husband and wife. So, the mystery woman can’t be an obsessed stalker, ex-girlfriend or anyone who would object.

With Quinn admitting that she can’t handle Eric being with someone else, could she take drastic action to find out? The mystery woman knows the date of the wedding, as well as the location and how to sneak into the mansion. So, it has to be someone who is close to Eric, Steffy or Finn. It’s possible that Quinn puts on a disguise and tries to sneak into the house to spy on Eric.

Since the mystery woman creates a lot of tension at the wedding, it has to be Quinn. That means she was caught sneaking around Eric’s home. He certainly won’t be happy about it and neither will a lot of the attendees. However, Eric doesn’t want to create a scene and ruin Steffy’s special day. Plus, the Forresters and the Finnegans are meeting for the first time. It would make a terrible impression if Eric lashed out at Quinn.

So, he likely allows her to stay but probably glares at her the whole time. Meanwhile, Quinn will try to act smoothly when she faces a room full of wedding guests. However, this is just one of the many surprises that happens during the wedding. We will have to keep watching the CBS soap to find out what else is in store for “SINN.”

Todd Chrisley Comments On Lindsie’s Divorce From Will Campbell