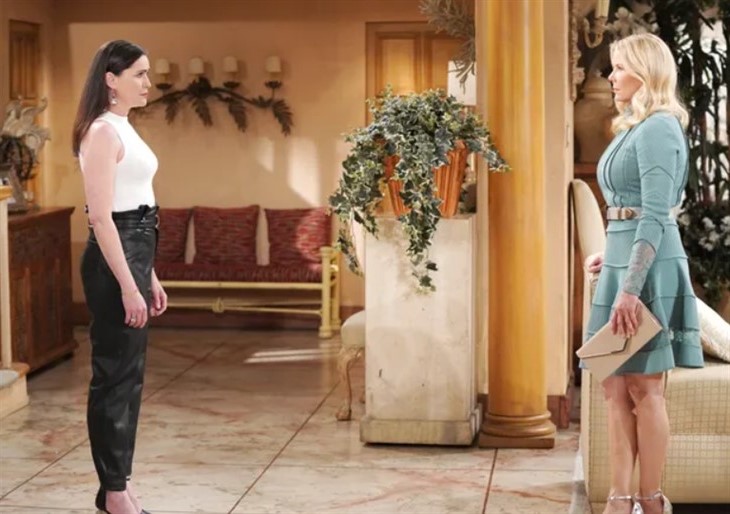 The Bold and the Beautiful (B&B) spoilers for Thursday, July 29, 2021, reveal in Los Angeles Quinn possibly trying to make amends but ending up angering her mortal enemy — again.

It’s now been weeks (in real time) since Brooke (Katherine Kelly Lang) interrupted Eric (John McCook) and Quinn’s (Rena Sofer) vow renewal with the news that Quinn had slept with the wedding officiant, Carter Walton (Lawrence Saint-Victor). Carter had to admit it was true and that was the end of Quinn and Eric’s marriage after nearly five years. Eric threw her out, forgave Carter, and assumed Carter would never want anything to do with Quinn again.

Eric was so wrong and Quinn and Carter now can’t keep their hands off one another. That doesn’t stop Quinn from stopping by Forrester Creations looking for Eric on Thursday, but unfortunately, she finds Brooke. And we all know Brooke won’t be able to stop herself and will go off on some kind of tirade on what a horrible person Quinn is and no doubt Quinn will fight back because that’s just who these two women are.

Will Eric walk in on this mess and if he does, what will he do? Will he agree to talk with Quinn or tell her to just get lost.

B&B Spoilers – Steffy Forrester Is Ready To Take The Plunge

Steffy (Jacqueline MacInnes Wood) makes Finn (Tanner Novlan) a very happy man when she tells him she’s ready to marry him. She’s also ready to plan a major wedding, something she is a pro at. Remember how she ziplined down into one of her weddings to Liam (Scott Clifton). Let’s see if she can top that one now that she’s a mother of two who is much more grounded in life and found a man who loves her and only her.

Now, all Finn has to do is get his family to come to the wedding — the family that Steffy was just telling him that she knows so little about. Will Finn give in and invite his parents to meet his fiance and their new grandson. Or has he already done that, leaving Steffy the one to get a big surprise in the days to come? It might very well be a full cliff house. Stay tuned to The Bold and the Beautiful weekdays to see how these stories play out.

Days Of Our Lives (DOOL) Spoilers: Do You Like Bonnie And Justin Together? Vote Now!