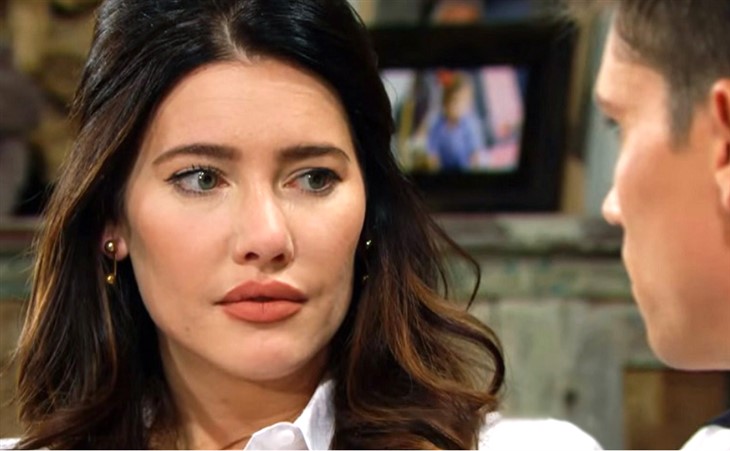 The Bold and the Beautiful spoilers for Tuesday, July 27, 2021, reveal in Los Angeles Steffy learning more about Finn’s past, which is a good thing at this point considering that she just had a baby with the man.

The Bold And The Beautiful Spoilers – Steffy Forrester Learns Some Lessons

Steffy (Jacqueline MacInnes Wood) was adamant that she wasn’t going to marry Finn (Tanner Novlan)) right there on the spot last week because she doesn’t even know his parents and never met even one member of his family. She doesn’t even know much about them or his past and thinks if they wed, he should at least have someone there on the groom’s side of the aisle.

While Finn seemed a little apprehensive about this, he eventually agreed with Steffy and promised her that he’d call his parents. On Tuesday, Steffy gets more information about her future husband than ever before. How will she react to what she learns? Does this information endear him to her more or will she begin to doubt getting so involved with someone she knows almost nothing about? Finn is about to give her a big surprise this week, so Steffy better be ready.

Zende (Delon de Metz) was shocked when Paris (Diamond White)told him she’s moving in with Steffy and Finn. He also wonders why she didn’t consult him when she made this decision. Did we miss when Zende and Paris became exclusive and she had to tell him everything she was doing with her life? The last momentous thing to happen between this pair was a first date in which Zoe (Kiara Barnes) and Quinn (Rena Sofer) spiked Paris’s drink to cause her stomach issues.

On Tuesday, Paris and Zende finally decide where they stand. Are they in a relationship with one another or are they going absolutely nowhere? It’s Zende who seems to want a commitment more than Paris, but will Zende convince her to give things a go in a serious way? Of course, this could go the other way and they may decide to end things since they can’t even agree on Paris’s living arrangements. Stay tuned to The Bold and the Beautiful weekdays to see how these stories play out.