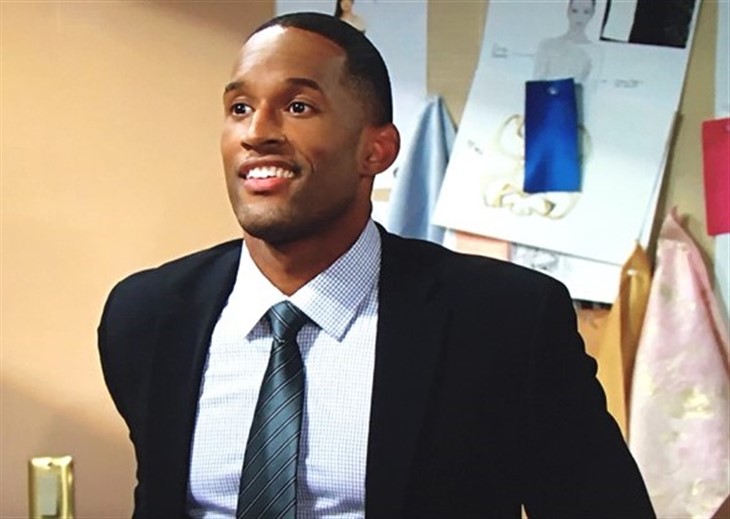 The Bold and the Beautiful spoilers document that Carter Walton’s (Lawrence Saint-Victor) spot at Forrester Creations is secure for the moment. But the audience sees the inevitable fall and ouster that is coming.

However, when Eric learns that Carter went against his conditioned reprieve, that Saint-Victor’s alter ego not be romantically involved with Quinn Fuller (Rena Sofer), the clear telegraph is that Forrester Creations will need to remove its Board of Directors’ member and lead counsel.

The Bold And The Beautiful Spoilers – Unbreakable Pull In Effect

Carter is simply experiencing what Eric did approximately five years ago when Queric formed. Quinn shines brightly when one first glances at her. She’s an angel that enters through a doorway, causing a man’s mind to become mush.

Facing the betrayal of Zoe Buckingham (Kiara Barnes), the woman who Carter believed was his soul mate, was rough. Carter was vulnerable. Quinn was something else.

It can not be honestly stated that Quinn was in the same vulnerability category as Carter. The difference being that Carter was wronged by his fiance, whereas Quinn disrespected Eric.

B&B Spoilers – Jealously Is The Mask Of Choice

FC is an iconic fashion house. Eric and Stephanie Forrester (Susan Flannery) founded and built it into a juggernaut.

The bounty of wealth and fame that Eric and his first wife created didn’t happen by random chance, meaning luck. It would also be a projection of anyone’s inner demons to claim that FC wasn’t built through heard work, skillful decision-making, risk-taking, and persistence. Jealousy often is the mask of choice that is worn by those who wish to demean the successful on B&B.

So, Eric did take Carter’s wise advice when not ending the accessory line. Yes, Carter’s personal feelings for Quinn were part of his defense, but he was right to advise his boss to not allow emotion to overwhelm good business sense.

Using the same line of logic, Eric can’t possibly allow Carter to continue at FC once he learns that Quarter has continued.

The Bold And The Beautiful Spoilers – Timing Of Divorce And Settlement

Will Quinn and Eric be officially divorced before the truth about her and Carter is revealed? If so, then Eric isn’t likely to make any dramatic decisions regarding the cash cow her talent is connected to via the jewelry line.

But if Quarter’s existence is revealed before the divorce happens, then Carter can’t possibly continue representing Eric. Plus, Carter will surely receive a pink slip and the pull of his Board seat. The effect on divorce proceedings and whatever settlement Eric offers Quinn will be impacted as well.

Mixing personal conflict with fashion money matters would be very B&B. So, fans are anticipating some of both to be presented to them.

Will EastEnders Character Tiffany Butcher Die In The Show?