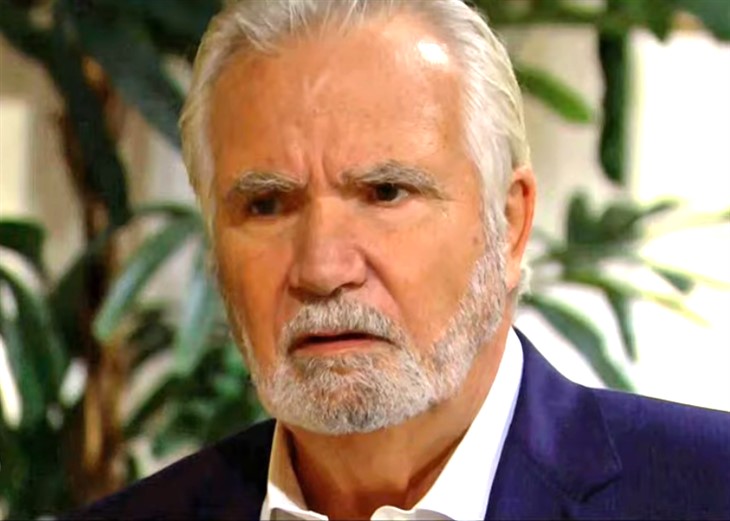 The Bold and the Beautiful (B&B) spoilers indicate that in Los Angeles Eric Forrester (John McCook) and Quinn Fuller’s (Rena Sofer) marriage may not be over.

Eric has once again given his wife the boot after discovering her affair with Carter Walton (Lawrence Saint-Victor). The Forrester patriarch is ready to begin the divorce proceedings.

Although many are happy to see Quinn go, they shouldn’t be celebrating just yet. Eric may be having a change of heart when it comes to ending his marriage.

Eric and Quinn became one of B&B’s unlikely couples. When it was revealed they were together, fans were shocked over the bombshell secret.

Their relationship earned criticism from Eric’s children, who refused to accept Quinn into the family. The dislike towards Quinn stemmed from her past misdeeds. Although the family was critical towards Quinn, Eric saw some good in her and made her his wife.

The couple’s marriage has faced many problems over the years. The biggest one was Quinn’s affair with Eric’s son Ridge Forrester (Thorsten Kaye). Although the two shared a few kisses, it never went any further than that.

Upon learning of their betrayal, Eric was furious. Yet, after some time, he forgave Quinn, and the couple reconciled.

Last year, Quinn found herself in more trouble with Eric. After it was discovered she schemed to break up Ridge and Brooke Logan (Katherine Kelly Lang) marriage, Eric kicked her out of the mansion. However, Quinn’s friend Shauna Fulton (Denise Richards) was able to convince him to give her another chance.

Things were going well for Eric and Quinn until they started experiencing intimacy issues. This led Quinn to confide in Carter, and what eventually led to their affair along with the end of her marriage.

B&B Spoilers – Quinn Forrester’s Moved On, But Has Eric Forrester?

With her and Eric no longer together, Quinn has moved on with Carter. Their steamy romance continues to heat up the screen. Although Quinn and Carter are becoming B&B’s hottest new couple, there is one problem that stands in their way.

Quinn is still in the process of her divorce from Eric. She’s accepted their marriage is over and is ready to move on. However, Eric may not be ready to let her go.

As soap fans know, whenever a character moves on to another partner, their ex becomes jealous. That may be the case with Eric.

Although he’s angry at Quinn for cheating on him, deep down he can’t forget the time they had together. As he reflects on their marriage, he may realize he misses her and wants her back in his life.
Eric’s change of heart will have an impact on Quinn and Carter’s relationship. During their affair, Quinn made it known she was staying with Eric, even though she loved Carter.

With Eric willing to give their marriage another shot, Quinn’s going to be left with a difficult choice. Does she go back to Eric? Or will she stay with Carter and see how their relationship plays out?

Keep checking The Bold and the Beautiful spoilers, news, and updates on Soap Opera Spy for more details.