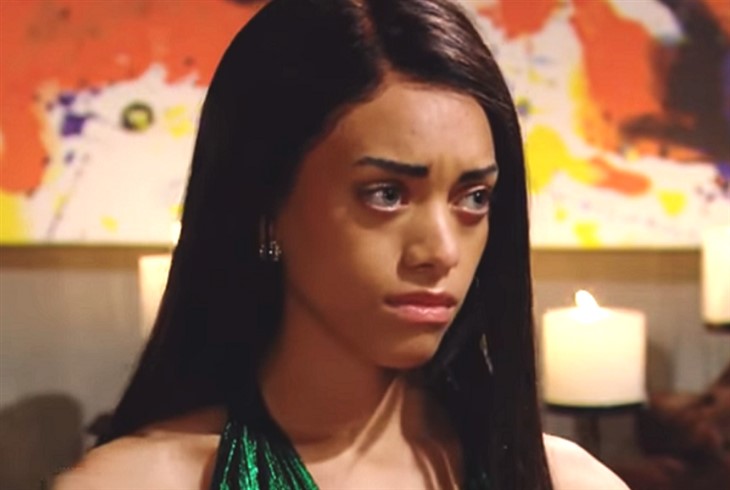 The Bold and the Beautiful (B&B) spoilers for Tuesday, July 6, 2021, reveal Paris finally finding the guts to tell a confused and then devastated Zoe what Carter and Quinn did.

The Bold And The Beautiful Spoilers- The End Of The Road For Zoe Buckingham?

It seems like the fiance or the spouse is always the last to know. Thanks to Brooke’s (Katherine Kelly Lang) eavesdropping and Quinn’s (Rena Sofer) loudmouth, Eric (John McCook) now knows that Quinn and Carter (Lawrence Saint-Victor) had an affair. His wife cheated on him with a man he thought of as a son and Eric had to learn about it while he and Quinn were renewing their vows. When Carter sadly admitted it was true, Eric had to believe it.

On Tuesday, it’s Zoe’s chance to learn what happened when Paris (Diamond White) realizes she has to do the right thing and let her sister know before the news is all over town. Zoe can barely believe her ears. Carter slept with a woman she thought of as a good friend — a woman she trusted and who had promised to help her win back Carter. How could this possibly be true?

Although she can’t believe it at first, like Eric, Zoe has to finally admit to herself that Carter slept with Quinn and was going to marry her with that secret between them. Considering this is Kiara Barnes’ last airdate, who wants to bet Zoe leaves town to clear her head?

All Hope (Annika Noelle) was trying to do was see how Liam (Scott Clifton) and Bill’s case was going when Douglas (Henry Joseph Samiri) texted her wondering when he would see Thomas (Matthew Atkinson). So, Hope texted him and heard Thomas’s phone go off right in Bill’s desk. On Tuesday, Justin (Aaron D. Spears) has no good explanation for why it was there as she realizes she hasn’t seen Thomas in days on end.

So, she decides to follow Justin wherever he goes next to see if he will lead her to Thomas. Hope doesn’t expect to be led into a dungeon but that’s exactly where she ends up. Stay tuned to The Bold and the Beautiful weekdays to see how this story plays out.  Keep checking Soap Opera Spy for more B&B spoilers, news, and updates.