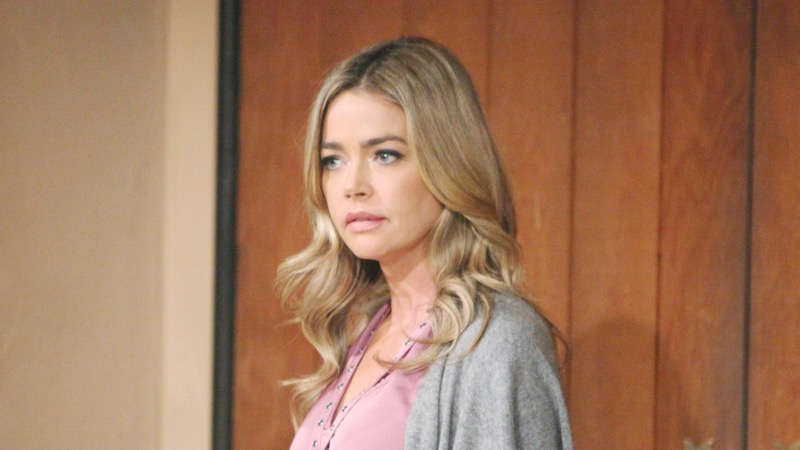 The Bold and the Beautiful spoilers document that Shauna Fulton (Denise Richards) is conflicted. Her tell to Quinn Fuller Forrester (Rena Sofer) indicates that Shauna doesn’t want to lie about being with Carter Walton (Lawrence Saint-Victor) forever.

B&B’s preview teasers indicate that Paris Buckingham (Diamond White) overhears Shauna and Quinn talking in Forrester Creations executive office. Beyond fans wondering when FC’s employees are able to work uninterrupted, they are also forced to ask what Paris will do next and what the total fallout will be as well?

If Shauna hadn’t stepped in and played the part of Carter’s recent love interest, Zoe Buckingham (Kiara Barnes) likely would have suspected that Quinn was the mystery woman. As fans recall, Zoe was stunned to learn that Carter was with an unidentified person at his apartment.

Various pieces of clothing, including Quinn’s red leather jacket, were seen strewn on the floor on The Bold and the Beautiful. Zoe next saw that same item on a chair in the executive suite. Thankfully for Quinn and Carter, Shauna was present.

Because Zoe doesn’t know the real truth, she’s been able to rationalize Shauna and Carter’s apparent, brief connection. However, on- and off-screen developments make it likely that the secret is about to be revealed.

Bold And The Beautiful Spoilers – What Is The Exit Strategy?

Along with the fluid plot, Barnes recently departed the cast in order to join the television reboot of Fantasy Island. So, Zoe is primed to leave town as part of her learning that Carter lied and that her assumed friend, Quinn, betrayed her trust.

The Bold And The Beautiful Spoilers: Eric And Carter Team Up, Quinn’s Lover Cracks? https://t.co/uvks1p4xwg pic.twitter.com/1kXB2ZzMwX

B&B had plenty of notice in order to prepare for Barnes’ departure. While Fantasy Island could become a nighttime hit or not, this solid actor will at least be gone for an indefinite period of time, if not for good.

So, the question becomes how does B&B write Zoe out if it isn’t going to recast the character? This appears to link to Paris overhearing Shauna’s conversation with Quinn and then confronting Richards’ character.

Bold And The Beautiful Spoilers – Paris Buckingham Loyal To Her Sister

Quinn knows that Zoe put a health remedy in Paris’ water bottle in the recent past. Sofer’s character prompted Zoe to do so as part of a revenge prank. Zoe never told Paris about that incident, which created intended digestion embarrassment while White’s character was on a date with Zende Forrester Dominguez (Delon de Metz).

The assumed reveal, where Paris feels compelled to tell Zoe what she’s learned, will spark a backlash against Quinn. Verbal retaliation can easily lead to Quinn telling Paris what Zoe did, thus damaging that sibling connection.

Zoe would be left with no fiance and a broken relationship with her sister. Those outcomes could convince Zoe to leave Los Angeles, California.