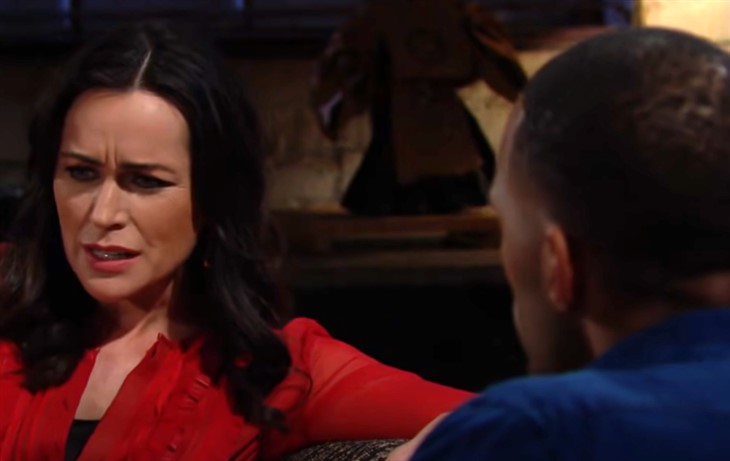 The Bold and the Beautiful (B&B) spoilers reveal that Carter Walton (Lawrence Saint-Victor) and Quinn Forrester (Rena Sofer) secretly meet. However, don’t expect passion this time. “Quarter” compares notes about Zoe Buckingham (Kiara Barnes) and Eric Forrester (John McCook). Even though nothing happens this time, could the wrong person see them together?

B&B spoilers reveal that Quinn told Carter that they would never tell anyone about their passionate encounters. She said that they would take their secret to the grave and Carter agreed. However, secrets always have a way of coming out in soaps. Even though their fling is over, “Quarter” will still struggle with what they’ve done. They will even secretly meet, which only shows how guilty they both feel.

When Carter and Quinn have their secret meeting, don’t expect passion. Even though they are still drawn to each other and are tempted, they will actually keep their clothes on this time. The reason why they arrange to meet up is to discuss what’s happening with each of their relationships.

The Bold And The Beautiful Spoilers – Comparing Notes About Relationships

The Bold and the Beautiful spoilers reveal that Quinn will talk about how she finally has her marriage back. She will add that Eric doesn’t suspect anything. Meanwhile, Carter will explain that he’s trying to move forward but Zoe. His only complication is that Zoe keeps bringing up his night with Shauna Fulton (Denise Richards). Quinn will view that as a good thing because it means she is still in the clear.

In soaps, whenever characters try to meet in secret, they are usually seen by someone. We already know that Paris Buckingham (Diamond White) finds out the truth, but it’s from overhearing Quinn and Shauna’s conversation. Flo Logan (Katrina Bowden) will interrogate Shauna, but it’s unlikely that is stalking “Quarter.”

The Bold And The Beautiful (B&B) Spoilers: Bill And Liam Both In The Hot Seat – Hope Breaks Down https://t.co/Wl0dq7YKni pic.twitter.com/Zdjmsha8VP

What would be interesting is if the worst person imaginable happened to see Quinn and Carter sneaking off to meet. What if Brooke Logan Forrester (Katherine Kelly Lang) just happens to be nearby and notices “Quarter” together? It could set up the stage for an explosive cheating reveal, just as Quinn did to Brooke. She has always wanted to punish Quinn for damaging her marriage by exposing the kiss with Bill Spencer (Don Diamont).

While “Bridge” ended up back together, we’re not so sure if Eric would forgive Quinn for sleeping with another man. What do you think is going to happen when the truth comes out? Who do you predict will end up exposing Carter and Quinn’s scandalous secret?