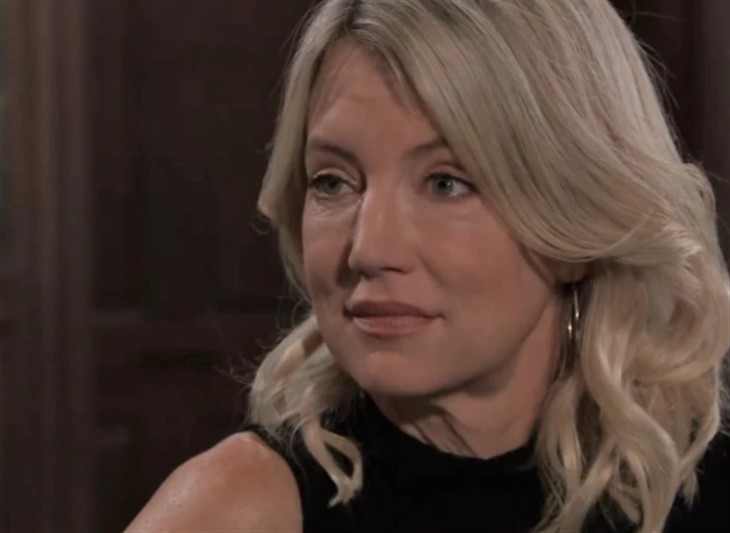 General Hospital (GH) spoilers for the next two weeks reveal that a couple of young bucks tangle horns while a leading lady returns to Port Charles, New York.

We have a lot of dishes but for starters look for Elizabeth Baldwin (Rebecca Herbst) to save Hamilton Finn’s (Michael Easton) bacon by keeping him from confessing to Peter August’s (Wes Ramsey) demise. Elsewhere Jason Morgan (Steve Burton) and Nikolas Cassadine (Marcus Coloma) will go mano a mano and Nina Reeves (Cynthia Watros) returns to PC and has a wise word with Maxie Jones (Kirsten Storms) who is fooling everyone into believing the dingos took her baby. Or something like that.

Elsewhere during the week of June 7-11, General Hospital spoilers indicate Michael Corinthos (Chad Duell) has the screws put to him by Jasper “Jax” Jacks (Ingo Rademacher).

Was Jax the one staring at Michael and Willow Tait (Katelyn MacMullen) getting their groove on, and if so could he blackmail Michael with the retina-burning evidence?

Meanwhile, Carly Corinthos (Laura Wright) has a snit fit when Nina is given access to their grandkid Wiley Quartermaine-Corinthos (Erik and Theo Olson).

Despite killing the golden goose, General Hospital spoilers tease Finn could be about to come up with a fix for Harrison Chase (Josh Swickard). In the meantime, he has to deal with pushing Peter down the stairs and leaving him in a pool of blood. Can’t win them all!

Elsewhere Carly’s professed newfound love of Britt Westbourne (Kelly Thiebaud) will be put to the test as she and Jason canoodle.

We love, love, love Liesl Obrecht (Kathleen Gati) and fans will see the tempestuous temptress in action as she confronts the reality of her daughter Britt’s Huntington’s marker truth.

In other words, Port Charles is scorching the next two weeks and you don’t want to miss a single minute of the action!