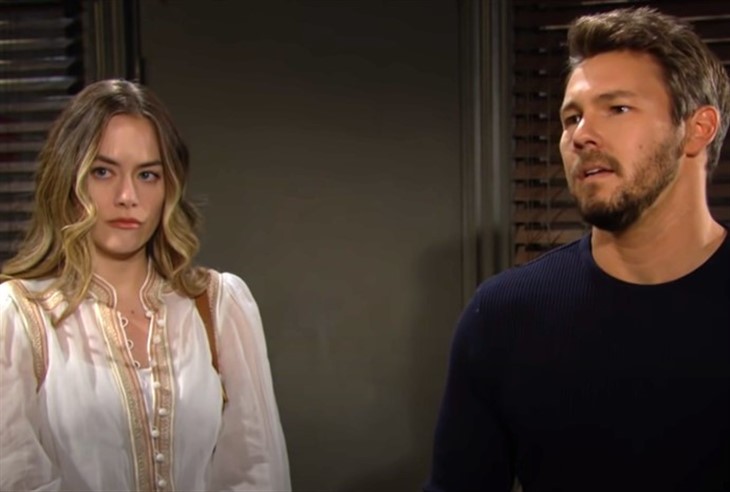 The Bold and the Beautiful (B&B) spoilers for Monday, June 14, 2021, reveal in Los Angeles Liam needing a big favor and going to a shocking person to get it.

The Bold And The Beautiful Spoilers – What Could Liam Forrester Want?

Liam (Scott Clifton) is falling apart inside but trying to keep himself strong as he wonders how long he will end up behind bars. But at least he told the truth now and unburdened himself so he has to let the chips fall as they may.

To that end, he needs to talk to Thomas (Matthew Atkinson) and has a request of him that Thomas certainly wasn’t expecting. Does he ask him to look after Hope (Annika Noelle), Beth, and Douglas (Henry Joseph Saimiri)? Of course, Thomas would look after his own son, but it would also be a dream come true to look after Hope, considering he spent so long obsessed with her and even made a roommate out of a mannequin that looked like her. Will he agree to do it?

B&B Spoilers – Quinn Forrester Is In A Panic

Now that Quinn (Rena Sofer) knows her secret is not safe and Paris (Diamond White) knows she slept with Carter (Lawrence Saint-Victor), she goes into a full-on panic. She and Eric (John McCook) had been doing so well and finally made love after months of him turning her down. How can something go so wrong now that her life is finally going right?

Quinn takes it upon herself to talk to Paris and begs her to keep what she knows a secret. She and Carter did not have a full-blown long affair. It was just two times where they lost their heads and ended up doing something stupid that they both regret.

If Paris were to tell Zoe (Kiara Barnes) the truth about what happened, what good will it do? Quinn insists she and Carter are over, so no harm, no foul, right? Why hurt everyone for something nobody needs to really know about? All it will do is hurt Zoe when Zoe is so blissfully happy being engaged to Carter once again? Will Paris actually take Quinn seriously or run to her sister with this hot information? Stay tuned to The Bold and the Beautiful weekdays to see how this story plays out.