The Bold And The Beautiful (B&B) Spoilers: Carter & Quinn’s Secret Blows Up 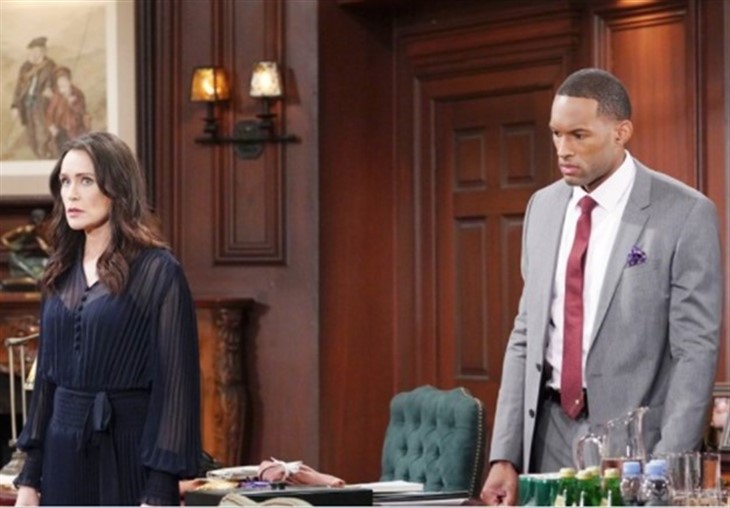 The Bold and The Beautiful (B&B) spoilers tease that the sinful secret held by Carter Walton (Lawrence Saint-Victor) and Quinn Forrester (Rena Sofer) may blow up in their faces when Paris Buckingham (Diamond White) makes an astonishing discovery in an upcoming episode of The Bold And The Beautiful!

The Bold and The Beautiful spoilers show that Flo’s mother, Shauna Fulton (Denise Richards) had fallen on her sword and pretended to have been the one who Paris’ sister, Zoe Buckingham (Kiara Barnes) had walked in on and was hiding under Carter Walton’s bed when Zoe spotted Quinn’s leather jacket laying over a couch in the design office.

It sounds like Flo will interrogate her mother over why she was sleeping with Carter, as she had heard when she knows that Shauna hadn’t been seeing anyone. Shauna, normally a very honest woman who was appalled that Quinn had been having at least two one-night stands with Carter while trying to reconcile with Eric Forrester (John McCook), took the unusual tact, at least for Shauna, of lying to cover up for her bestie Quinn. But Shauna will want her daughter to know the real truth and confess what really happened. Unfortunately, it sounds like Paris will be in the wrong place at the wrong time and hear the true story!

Viewers of The Bold and The Beautiful will recall that it has been very difficult for Carter and Quinn to act normal around one another in the office, even though they swore to keep their brief affair a secret. Paris is in an awful position, considering that she was the one who inadvertently broke up Zoe and Carter’s engagement to begin with, by telling Ridge Forrester (Thorsten Kaye) that Zoe had gone over to the Forrester mansion. Ridge went and found Zoe trying to seduce Zende Dominguez (Delon DeMetz) the night before her wedding to Carter, which hurt Carter so bad he dumped her on the spot! Paris may be aware that Quinn had been talking to Carter on Zoe’s behalf to try to get him to take Zoe back.

Viewers of The Bold and The Beautiful will recall that it was a very bad breakup. But now Paris has a choice to keep her mouth shut – or to tell the truth and hurt her sister or lie and still hurt her sister. She knew that Shauna had confessed to sleeping with Carter, and it wasn’t like Zoe and Carter were together at the time; but if she tells her what she knows, fearing that Carter isn’t such a prize after all, and warning Zoe if she tells her she knows it was Quinn who slept with him and not Shauna, it will be a double betrayal for Zoe! If she does tell Zoe the whole truth she knows, she also knows that Zoe will not keep quiet and tear into Quinn for sleeping with Carter, and possibly in front of Ridge or Eric!