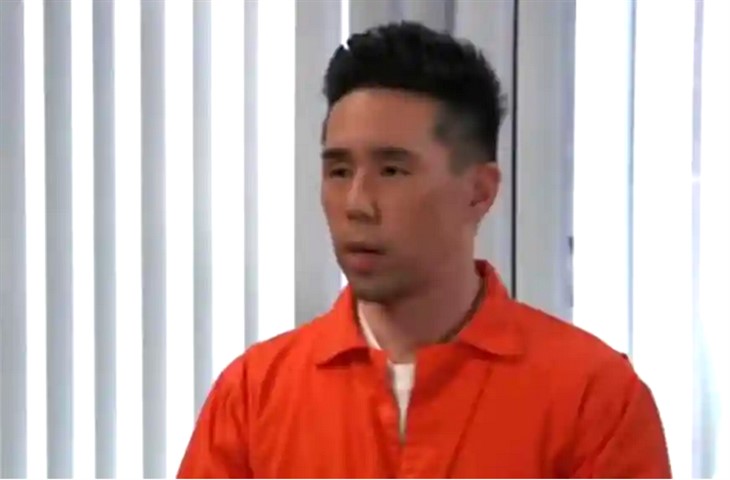 General Hospital (GH) spoilers and updates reveals since last February, Brad Cooper (Parry Shen) has been arrested for passing off Jonah/Wiley Corinthos-Quartermaine (Theo and Erik Olsen) as his and Lucas’ (Ryan Carnes) child. We can see that he regrets his actions and wants to do right by everyone he had hurt, especially his ex-husband Lucas. Not only that, but Brad wants him and Lucas to be a happy and loving couple again. However, Lucas does not return those feelings and has moved on. In fact, he apparently started pursuing Felix (Marc Samuel- Google). Brad is not happy about that; therefore, he might do something drastic to win him back.

According to General Hospital Wiki, Brad told Britt (Kelly Thiebaud) that his parole is coming up. Britt is making plans for him to be out of Pentonville by the Nurses’ Ball. Now we don’t know what those plans are, but it could be something big and/or diabolical. Will she try to make a case with the police officers? Or if that fails, maybe she could recruit Dante (Dominic Zamprogna) to stand in as a parole officer and pretend to give Brad parole. Dante may or may not want a favor in return. It might have something to do with him and Sam (Kelly Monica) and keeping Olivia’s (Lisa LoCicero) nose out of his business. Either way, if Britt’s plans work, Brad will be free by the time the red carpet is rolled out for the Nurses’ Ball.

Speaking of the Nurses’ Ball, instead of eating ice cream and watching it on television with Britt, Brad may want to attend the event in person so he could have a chance to win Lucas back. First he will warm up the audience with a forgiveness love song, probably either “If I Can Turn Back Time” by Cher, “We Belong Together” by Mariah Carey, “I Want You Back” by Jackson 5, “The Sweet Escape” by Gwen Stefani and Akon, or “Baby Come Back” by Player (remember when Spencer (Nicolas Bechtel) hired Player to perform at the 2014 Nurses’ Ball?).

After the song, he will address Lucas with a tearful speech about how he is highly sorry for what he did and how his life is meaningless without him. Then Brad will take a ring out of his pocket, bend down on one knee, and ask Lucas if he would forgive him for his mistakes and do him the honor of remarrying him. Of course, Lucas is more likely to reject him since he hurt him deeply and he’s starting to show interest in Felix (he will probably bring Felix as his date to the Ball!). Then again, anything could happen on a soap. Lucas might even eventually have a hard time choosing between Brad and Felix. We’ll just have to wait and see.

What do you guys think? Do you think Brad will be out of Pentonville in time to woo Lucas at the Ball? Will he succeed? Do you want Lucas and Brad back together, or do you feel like Lucas is better off with Felix? Better yet, are you interested in a Brad-Lucas-Felix love triangle? Comment below!