GH Spoilers: Dante and Sam Get Flirty on Their First Date! 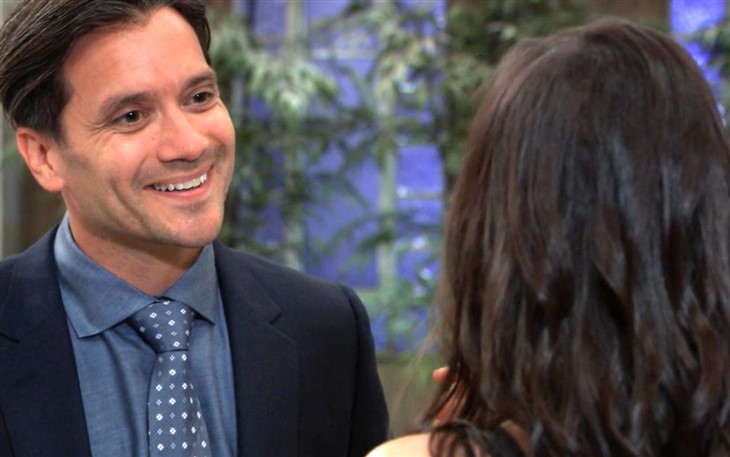 General Hospital spoilers tease that in this week’s General Hospital Sneak Peek, Sam McCall (Kelly Monaco) and Dante Falconeri (Dominic Zamprogna) have such a good time in their Single Parents Anonymous meeting, that Dante wants to know if it’s a support group meeting or a date!

General Hospital viewers will recall that in a recent episode of General Hospital, Sam and Dante decided they needed a support group for single parents, of which each of them is. With Sam divorced from one child’s father and as far as she knows, the other one’s father deceased, and Lulu Spencer (Emme Rylan) being in an indeterminate coma, Sam and Dante have been leaning on each other. Dante halfway kiddingly had suggested that the two of them form their own two-person support group for single parents to be called the “SPA”, standing for “Single Parents Anonymous”. Sam had quickly picked up on the initial spelling “spa” and was all for that!

General Hospital viewers will recall that there recently has been a rooftop pool and minibar installed on the roof of the Metro Court, and it has been very successful. Sam and Dante meet at one of the tables, and Sam brings up a case the two are investigating separately but cooperating on – the murder of Naomi Dreyfus (Gigi Bermingham). Sam wants to know since they are both there did he want to go over the case with her. Dante asks Sam if that is against the rules – and she is a little puzzled at his remark and asks what rules! Dante says he’s talking about their support group, “single parents anonymous”! He reminds her that the whole point of their two-person support group was for relaxing and unwinding, and talking about work only defeats the purpose! General Hospital viewers will recall that Sam, along with Shawn Butler (Sean Blakemore) were the ones who found Naomi dead in her Metro Court suite and Sam had called Dante for assistance.

Sam agrees, and tells Dante he’s right – their conversations in their little support group have been nice, and unwinding, and all of that, but they’ve talked so much about their kids! General Hospital viewers will recall that Sam has two – Danny Morgan (Porter Fasullo) and Scout Cain (Ella Ramacieri) and Dante has one, Rocco Falconeri (O’Neill Monahan). Dante agrees, but talking about their kids kind of goes along with the single parent thing, doesn’t she think? Sam laughs, agreeing with him and talks about how he told her all about the rock climbing thing in the park. Dante tells her yes, and that led to her telling him about the time she scaled a wall going after a deadbeat dad. Dante liked that story! Sam tells him that led to his chasing all of the boring bad guys stories! General Hospital viewers will recall that Dante is a detective with the Port Charles police, and Sam is a private investigator, but they are basically the same kind of work!

GH Spoilers – Is This A Date?

General Hospital viewers will have noticed that Sam and Dante have a certain rapport with each other – and a good time when they’re together. Dante kids her about speaking for herself about her description of his bad guy stories being boring, telling her to speak for herself! He thinks his stories are fascinating! Sam laughs and agrees that the stories are breathtaking. Dante agrees, Sam agrees too, and says those led to her “what was my kid thinking” stories! Dante smiles and agrees that was a good time, right? Sam asks what? Dante is kind of staring and smiling, and asks her if this is a date – she looks deep in thought but doesn’t answer right away. General Hospital viewers will see her answer on Monday!