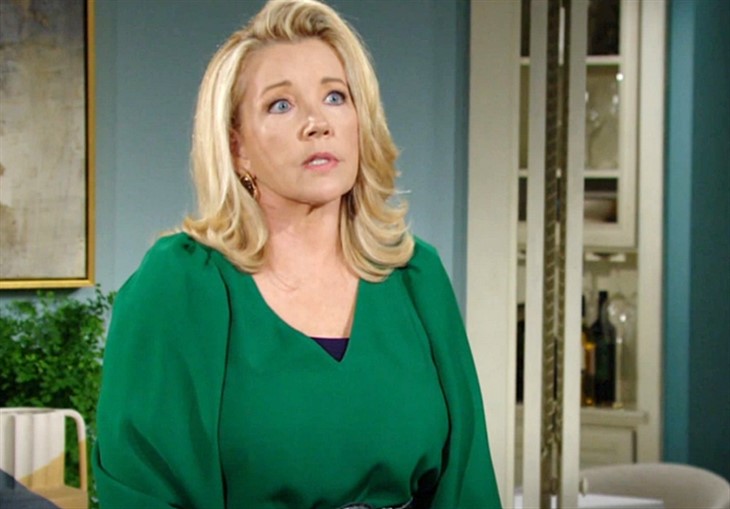 The Young and the Restless spoilers and updates tease that Nikki Newman (Melody Thomas Scott) will run into Sally Spectra (Courtney Hope) at Crimson Lights. Their uncomfortable and unexpected meeting gives Nikki the chance to warn Sally that she can take matters into her own hands.

At first, Sally won’t consider Nikki a threat but more of an annoyance. But she’ll realize later that she’s made a new enemy out of Nikki. The latter will issue a warning that she, too, can take matters into her own hands. Nikki wants Sally to know that she’ll do anything to protect her family even if it means getting her hands dirty. Sally doesn’t scare easily. Whether she’ll take Nikki’s threat seriously or not still remains to be seen.

Elsewhere, Phyllis Summers (Michelle Stafford) will kick someone out of her hotel and it seems like that unlucky person is Sally. Fans know that Phyllis was left devastated when Summer decided to stay in Italy. Nick Newman (Joshua Morrow) will try to cheer her by coming up with a “Phyllis Appreciation Day.” He’ll go all out to make Phyllis smile.

Meanwhile, Tessa Porter (Cait Fairbanks) will make a shocking discovery that links to Mariah Copeland’s (Camryn Grimes) disappearance. Mariah is currently being held captive and she’s beginning to get worried that she might give birth in the place where she’s being kept hostage. She doesn’t want to deliver her baby alone. She’ll hope that someone will find her before she gives birth.

As for Rey Rosales (Jordi Vilasuso), he’ll work with Kevin Fisher (Greg Rikaart) to find Mariah. They will question their primary suspect, who is Ben “Stitch” Reyburn (Sean Carrigan) since he’s been acting very suspicious.

Adam Newman (Mark Grossman) will receive a warning from Victor Newman (Eric Braeden). It may have something to do with Sally Spectra (Courtney Hope), who’s now part of the Newman Media company.