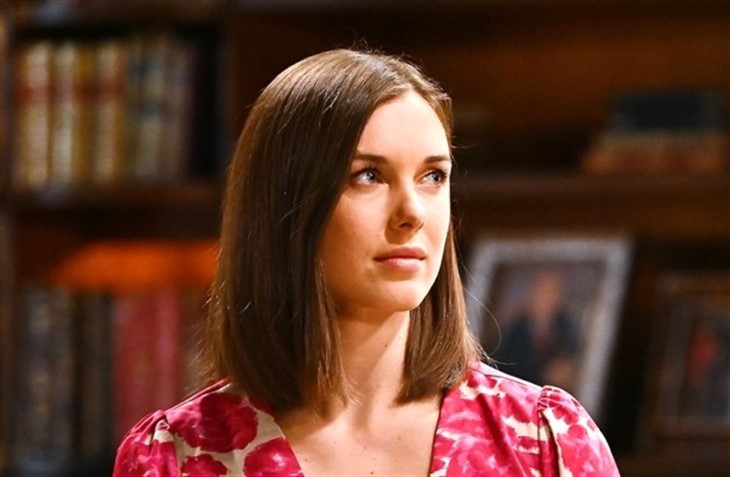 General Hospital spoilers for the week of November 15 reveal that Willow Tait (Katelyn MacMullen) and Wiley Quartermaine-Corinthos (Caleb and Kyler Ends) run into Nina Reeves (Cynthia Watros). Willow might allow the two to interact for a few minutes, but Michael Corinthos (Chad Duell) could get the wrong idea.

GH spoilers reveal that Nina was arrested when Michael made a deal. However, his decisions are affecting his relationship with Willow. Meanwhile, Nina knows that one of the most important relationships in her life, with grandson Wiley, has been cut off.

Recently, Willow told both Michael and Carly Corinthos (Laura Wright) that she’s noticed Nina hasn’t even tried to see Wiley since the truth came out. Willow was pretty clear that the best move is no move at all. Willow worries that if they start playing hardball when Nina hasn’t tried to see Wiley, they could end up losing.

Willow was upset that Michael made such a drastic decision about Nina’s fate without even talking to her about it. Michael is trying to do what he thinks is right for his family. However, Willow fears that this could end badly and she might be right about that.

General Hospital spoilers reveal that Willow doesn’t agree with Carly and Michael’s stance on Wiley’s maternal grandmother. When Michael proposed, Willow didn’t accept. The young woman didn’t say no either, but it is clear that she is worried about the new path that Michael is taking in his life.

During the week of November 15, Nina will run into Willow and Wiley. It sounds like Michael isn’t with them and Willow has a soft heart. So, she could allow Nina and Wiley to have a brief interaction, thinking there would be no harm. However, chances are that Michael will find out about it. Either Wiley will mention something or Michael could see Nina talking to Wiley. It’s possible that Nina might even get to hold her grandson for a few moments.

Even though this meeting is a coincidence on Willow’s part, Michael might not see it that way. With the direction he’s going, Michael could blow up at Willow and even suggest she’s siding with the enemy. Michael could not only risk his entire relationship over his quest for vengeance but could end up losing everything he cares about.

What do you think is going to happen when Willow and Wiley cross paths with Nina? Will Willow allow Nina to interact with her grandson and if so, how will Michael react when he finds out?