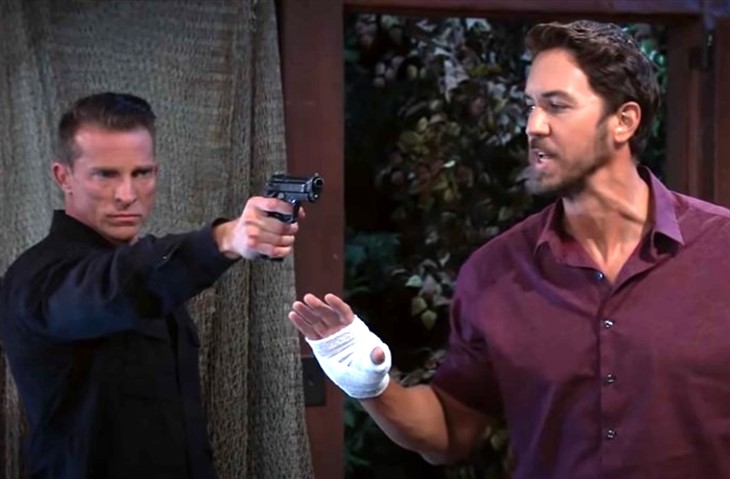 General Hospital (GH) spoilers for Tuesday, November 9, 2021, reveal Peter August continuing to live despite nearly every character on the show having a crack at him. Now it’s Jason and Drew’s turn. Will they be able to activate their wonder twin powers and complete this damn mission before Peter escapes again?

General Hospital Spoilers – Jason Morgan Thinks He Has A Plan

GH teasers tell us that Peter (Wes Ramsey) does something great and powerful that nobody sees coming, but does that mean he escapes again or does something happen after this great and powerful move? Jason Morgan (Steve Burton) and Drew Cain (Cameron Mathison) think they have a plan and Drew pretends he is under Peter’s control, but does Peter fall for it as he hisses and twirls his mustache?

Jason warns Peter that the next time they meet, things will have a different ending. If that means Peter will eventually die at Jason’s — or anyone’s — hands, then that sounds just fine.

Maxie Jones (Kirsten Storms) doesn’t understand why Harrison Chase (Josh Swickard) just won’t leave well enough alone when it comes to Louise’s disappearance. He can ruin everything — unless they tell him the truth.

When Maxie tells Brook Lynn Quartermaine (Amanda Setton) that she is ok with bringing someone “in” does she finally give Brook permission to tell Chase the truth about Bailey so there won’t be this big lie between them if they ever start dating. It would certainly add a new element to this story and bring things along a bit.

Meanwhile, Austin Holt (Roger Howarth) starts becoming very curious about Gladys Corbin (Bonnie Burroughs) and what she’s really up to. He is a very determined man and is sure to find out her little Valentin Cassadine (James Patrick Stuart) secret.

Sonny Corinthos (Maurice Benard) is well aware his son, Michael (Chad Duell), has let power go to his head and now seeks revenge on anyone he can. He wasn’t able to get him to lay off Nina Reeves (Cynthia Watros), but perhaps he can now convince him to not go after Brad Cooper (Parry Shen) once he is out of jail.

After all, he promised Mrs. Wu her nephew would be safe. Will Michael listen or just do whatever he wants in a vain attempt to prove he is a strong man? Stay tuned to General Hospital weekdays to see how this story plays out.