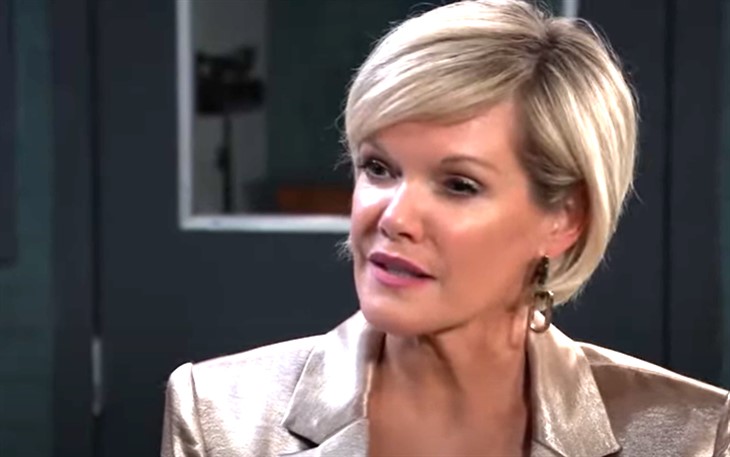 General Hospital (GH) spoilers for Wednesday, October 27, 2021, reveal Ava knowing when she has Sonny Corinthos right where she wants him.

Ava (Maura West) can’t believe her luck. Yes, Sonny Corinthos (Maurice Benard) is back and he is nicer. And he is nicer because he spent nine months away from Carly (Laura Wright) and six months with the best friend who once stole a baby out of her womb. She even has Sonny desperate to buy Charlie’s Pub and agreeing to let her have more time with the baby Nina (Cynthia Watros) stole at birth.

She also knows that Smike and Nina were sitting in a tree, so to speak, over there on the Pennsylvania side of the river in Nixon Falls. Nina kissed and told and Ava can also tell a lot — if she wants to. When she tells Sonny she’s not even sure she wants to sell him the pub, Carly is quite curious about what’s going on. Why would Sonny buy a bar and not tell her? Why, Ava thought Sonny and Carly told one another everything.

Meanwhile, Nina at least gets some sympathy from Jax who can’t believe that Michael (Chad Duell) had her arrested. Nina asks him to stop trying to rescue and save her.

After marrying Harrison Chase (Josh Swickard) thinking he would die, then cheating on him with Michael, and then dumping poor Chase, Willow (Katelyn MacMullen) might be wondering if she made the wrong choice. She didn’t realize Michael could be such a vindictive and ruthless snob and wonders why he didn’t even tell her what he was up to. Hmm, the grass is always greener, right Willow?

Alexis Davis (Nancy Lee Grahn) will make an appearance, which means someone must need someone to vent to. This time, that someone is Nikolas Cassadine (Marcus Coloma). He realizes his aunt is still trying to figure out who shot Hayden and figures he might need to head this one off at the pass.

It looks like Molly (Hayley Pullos) and Shawn (Sean Blakemore) also stop by and they take some time for themselves to talk about Shawn’s future. Stay tuned to General Hospital weekdays to see how these stories play out.