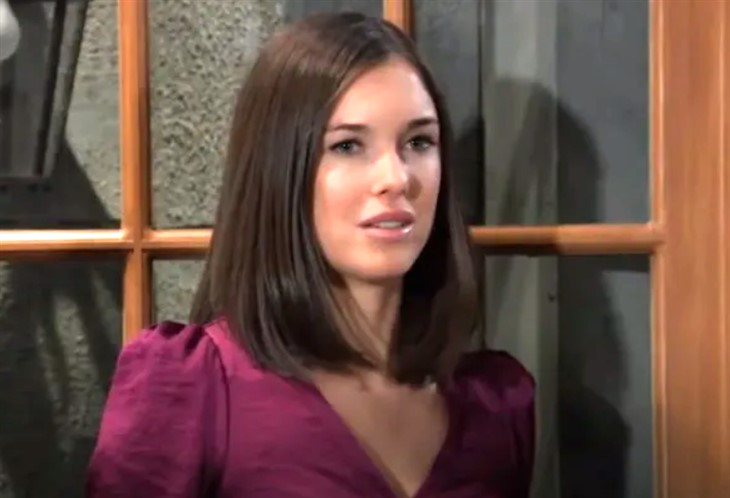 General Hospital (GH) spoilers for Thursday, October 28, 2021, reveal in Port Charles Willow dealing with yet another marriage proposal. What is such a popular young woman to do?

General Hospital Spoilers – I Do, Again?

We saw it coming a mile away when Willow Tait (Katelyn MacMullen) married Harrison Chase (Josh Swickard) on his deathbed hoping he’d go quick so she could resume her love affair with Michael. It was already the second time she wed within a year and the first time she wed Michael.

Now, Willow and Chase are over (again) and Michael (Chad Duell) is down on one knee proposing. This is after he just broke the law by bribing a politician to arrest Nina (Cynthia Watros) for not actually breaking the law, so Willow was a bit miffed at Carly’s little ray of sunshine.

GH spoilers say that Willow and Michael are forced to have an honest conversation about their relationship and future together, but does Michael even know what honesty is anymore?

Sonny Corinthos (Maurice Benard) is shocked when he gets a phone call from Cyrus Renault (Jeff Kober), one of the men responsible for him going off that bridge in Secaucus, NJ and ending up on the Pennsylvania side of the river. Does Cyrus want to welcome him back?

Meanwhile, Carly Corinthos (Laura Wright) gets an earful from Nina Reeves over at the Metro Court, with Nina telling Carly that Sonny was much better off in Nixon Falls. She might even be right. He was definitely much more relaxed there.

General Hospital Spoilers – All About Nikolas Cassadine And Spencer Cassadine

Alexis Davis (Nancy Lee Grahn) finally decides whether she should take Nikolas (Marcus Coloma) up on his little corrupt offer or tell Shawn Butler (Sean Blakemore) about her nephew being behind Hayden’s (Rebecca Budig) shooting. She can do the right thing after doing the wrong thing by stabbing Dante (Dominic Zamprogna), but then the right thing by owning up to it. Or she can take her get-out-of-jail-free card and run. What will Alexis choose to do?

Nikolas hopes his hard work for Alexis pays off when he heads to Kelly’s for a bite to eat and finds Spencer (Nicholas Chavez) working there. How will Nik react to his son being such a townie? Stay tuned to General Hospital weekdays to see how these stories play out.