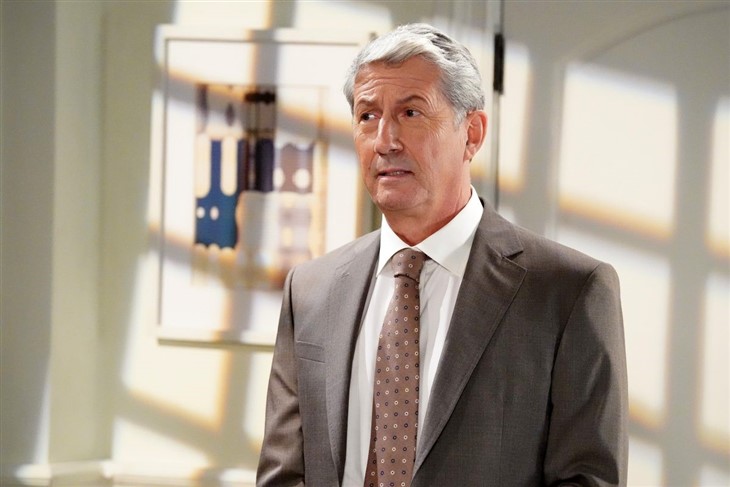 General Hospital (GH) spoilers tease that Victor Cassadine (Charles Shaughnessy) is making some big moves now that he is out of legal hot water, at least for the time being. After being arrested and brought to Port Charles for his role in Drew Cain’s (Cameron Mathison) abduction, Victor was granted immunity after making a deal with the WSB. But that doesn’t mean Victor doesn’t have something devious in mind going forward. As viewers know, it was Victor who hired an assassin to kill Mayor Laura Collins (Genie Francis). But it seems that Victor may have more intimate plans for the very married Ava Jerome (Maura West)

This wouldn’t be the first time that Victor had a passionate affair with a married woman, as his relationship with Helena Cassadine (Constance Towers) seemingly produced Valentin Cassadine (James Patrick Stuart). But while Ava certainly enjoys the finer things in life, she is happily married to Victor’s nephew, Nikolas Cassadine (Marcus Coloma). In addition, Ava is wary of Victor and his plans for the Cassadine family. She may pretend to enjoy Victor’s company while all the while trying to figure out exactly what Victor is up to. But will Ava find herself in danger if Victor suspects she is deceiving him?

Victor is dangerous, as he proved by putting out a hit out on Laura. He indicated that he only put out the hit to bring Laura back to town, but that may or may not be true. He has also indicated to Nikolas that he has disposed of Hayden Barnes (Rebecca Budig), a fact which Ava is very well aware of. So while she may pretend to get close to Victor in order to figure out what he is up to, she should be very careful because Victor is certainly not afraid to kill anyone who might get in the way of this plans. Ava should be very careful if she toys with Victor’s emotions, it could cost her dearly.

General Hospital Spoilers – Victor Cassadine Is Used To Getting What He Wants!

If Victor suspects Ava is duping him, he won’t hesitate to get revenge. He says that family means everything to him, but he wouldn’t hesitate to harm Nikolas to get back at Ava. If Ava plans to get close to Victor she will hopefully clue Nikolas in to whatever plans she has. Otherwise, it could mean disaster for everyone involved!

Will Victor succeed in seducing Ava? Or does Ava have a trick or two up her sleeve? Will she let Nikolas in on her plans? Anything can happen in Port Charles so stay tuned to General Hospital airing weekdays on ABC. And don’t forget to check back right here regularly for all your General Hospital news, information and spoilers!