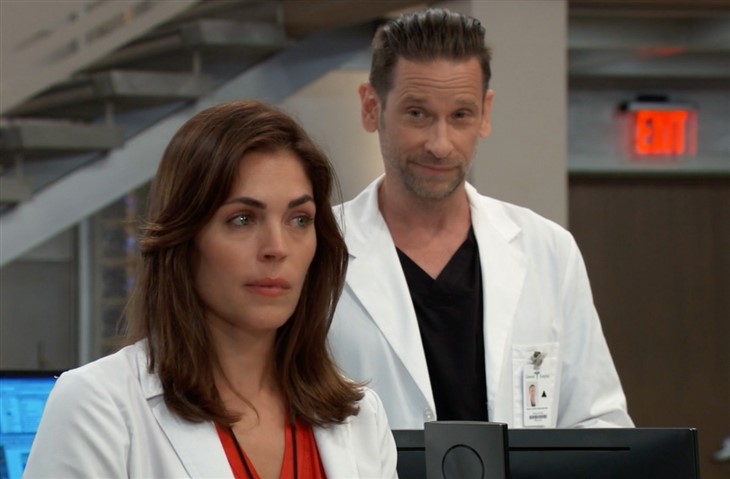 General Hospital (GH) spoilers and updates tease Dr. Britt Westbourne (Kelly Thiebaud) received a unique Christmas gift from her mother Dr. Liesl Obrecht (Kathleen Gati). Liesl has been worried about Britt and wanted to find a way to help her.

According to GH recaps, Britt thought that she would have a future with Jason Morgan (Steve Burton). Britt was devastated when Jason tragically lost his life. Britt has been trying to put the past behind her but she has been struggling. Liesl decided create a profile for Britt on an online dating service. Liesl hopes that Britt will be matched with someone who can mend her broken heart.

Britt was surprised that Liesl created a profile for her online. Britt is not sure if she is ready to move on and find someone new to love. Liesl believes that Britt should find the courage to move past her sadness to give love another chance. Britt has tried in the past to find love but has not been able to hold on to it.

Britt tried to make her relationships with Nikolas Cassadine (Marcus Coloma) and Patrick Drake (Jason Thompson) work but they did not last for different reasons. Britt is unsure if she should put her faith in the online dating site but Liesl believes that it could help her find someone new to love.

Britt has found herself becoming friends with Dr. Austin Gatlin-Holt (Roger Howarth) on ABC General Hospital. Britt has been grateful to Austin for helping to support Maxie Jones (Kirsten Storms) when she needed a friend. Austin has not been in Port Charles for long but he wants to have a committed relationship. Austin wanted to find out if he and Maxie could be a couple.

Austin helped Maxie to deliver her daughter Louise August (London and Jett Prinzo-Berendt). According to General Hospital spoilers, Maxie has been reluctant to move on because she is still dealing with her past love Peter August (Wes Ramsey). Austin values his friendship with Maxie and has decided to give her the distance that she needs. Austin may have decided that he needs to move on and created an online profile for himself.

General Hospital updates and spoilers tease Austin and Britt may find that the internet will bring them together. Austin has been concerned about Britt. Austin knows that she has been having trouble moving on after losing Jason. Austin would be surprised to find out that he could be a good match for Britt. Will Austin and Britt be brought together because they have compatible personalities?

Britt respects Austin and has wanted the best for him. Britt has not thought that Austin could be someone that she could date but could find that he may be the one to help her move on. Will Britt find love again with Austin? Be sure to catch up on everything happening with GH right now. Come back here often for General Hospital spoilers, news, and updates.

DOOL Comings and Goings: A Priest Pops Up, A Wicked Exit, Kristen 2.0 Back