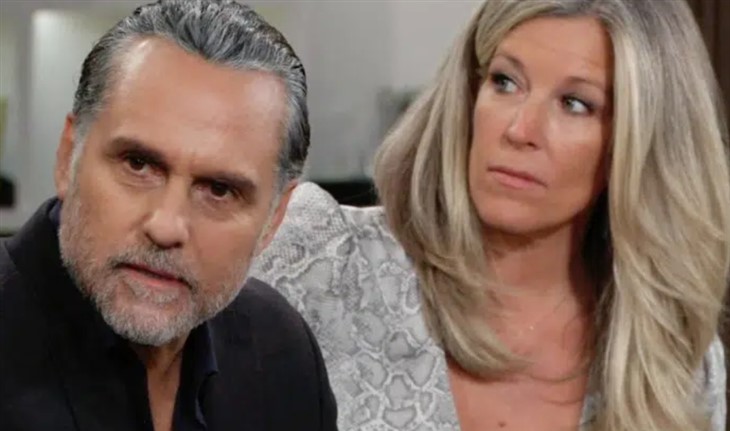 General Hospital (GH) spoilers for Friday, January 3, 2022, reveal Carly Corinthos all in her feelings while seeking out Jason Morgan in whatever way she can.

Carly (Laura Wright) still can’t get over the fact that Sonny Corinthos (Maurice Benard) fell for Nina Reeves (Cynthia Watros) of all people when he thought he was a bartender named Mike in Nixon Falls. But that’s exactly what happened and now she can’t believe he didn’t even tell her. She had to hear it from Willow Tait (Katelyn MacMullen) when she broke down and told the truth in court. How rude of Sonny when she married his best friend and then almost slept with him in Sonny’s bed.

So, Carly makes her way to the famous footbridge that Jason (Steve Burton) shared with Robin Scorpio (Kimberly McCullough) and not her, and then makes things all about her. When Drew Cain (Cameron Mathison) shows up, also searching for Jason’s spirit, she tries to brush him away and then she vents to him, so they are there for each other. But please, don’t ever let them be there for each other romantically. Ewww…

Meanwhile, Nina rings in the new year with a drunk Sonny, and if we’re lucky, something will finally happen between them.

Felicia Jones Scorpio is back on our GH screens and Kristina Wagner is back on contract, so maybe she and Anna Devane (Finola Hughes) can put their heads together in 2022 and finally find Maxie’s (Kirsten Storms) baby — or at the very least figure out what Maxie has been up to with that baby. First, they vow to get their hands on Peter August (Wes Ramsey), something Mac Scorpio (John J. York) also wants in on.

Speaking of Peter, Victor Cassadine (Charles Shaughnessy) stops by the hospital to pay the comatose patient a visit. We can only dream that he will finally off him, but we also know we could never get that lucky.

Poor Alexis Davis (Nancy Lee Grahn) is feeling down as the new year begins. She would love to start a new job as a law professor, but that criminal background check weighs on her mind. When she runs into Harmony (Inga Cadranell), she tells her she is nothing but an ex-con now and Harmony ensures her she is much more than that.

She gives Alexis a good pep talk and tells her that if she can turn her life around, anyone can. Stay tuned to General Hospital weekdays to see how these stories play out.