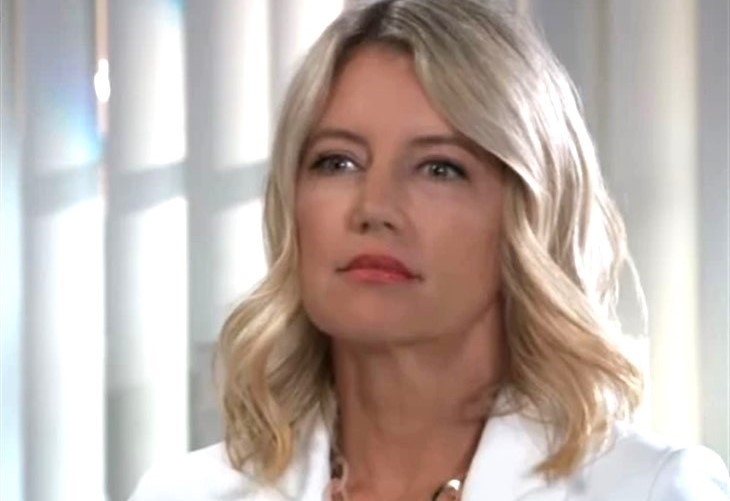 General Hospital (GH) spoilers reveal Nina Reeves (Cynthia Watros) preliminary hearing is about to get very dramatic as Scott Baldwin (Kin Shriner) maneuvers his way into getting Willow Tait (Katelyn MacMullen) on the stand. Will Willow open up about Nina’s relationship with Sonny Corinthos (Maurice Benard) or keep quiet for the family?

General Hospital’s Watros believes that her character is worried about Sonny much more than herself. Nina knows that Sonny wants to be the one who tells his wife about their affair in Nixon Falls. After all, Nina doesn’t believe that anything will come from these charges and she doesn’t want their dirty laundry aired in court. Sonny has asked Nina to keep quiet so that he can tell Carly Corinthos (Laura Wright) what happened. Unfortunately, that may not be the case now that Liesl Obrecht (Kathleen Gati) has given Scott the information he needs to clear Nina’s name. Will Scott expose Nina and Sonny’s relationship to save Nina from prison? Will Sonny lose his family for not being honest?

General Hospital’s Carly and Michael Corinthos (Chad Duell) both want the book thrown at Nina. Unfortunately, it doesn’t look like they are going to get their way. If Sonny had initiated the charges in the beginning, it might have made a difference but not now. Nina understands their attitudes but that doesn’t make it any easier to accept. Nina knows her actions were wrong but she also knows that she fell in love with the other side of Sonny and doesn’t feel that she should be faulted for that. Nina is justifying her actions because Sonny wasn’t actively looking for his family.

General Hospital’s Willow knows the truth about Sonny and Nina. However, Willow has promised to keep quiet. Willow knows that Michael will be furious that she didn’t tell him about Sonny and Nina’s relationship. Nina doesn’t expect Willow to even testify, after all, Michael is the one who brought the charges against her. When Scott calls Willow to the stand, Nina is floored. Willow overheard Sonny and Nina discussing their time in Nixon Falls. How did Scott become aware of this? Why would Scott risk this coming out?

Nina is very nervous once Willow is called to the stand. Nina has no idea where this conversation is going but it is going to be bad in the end she believes. What will Nina do if the truth comes out in court? Will Sonny ever forgive Nina for allowing this to happen in open court?