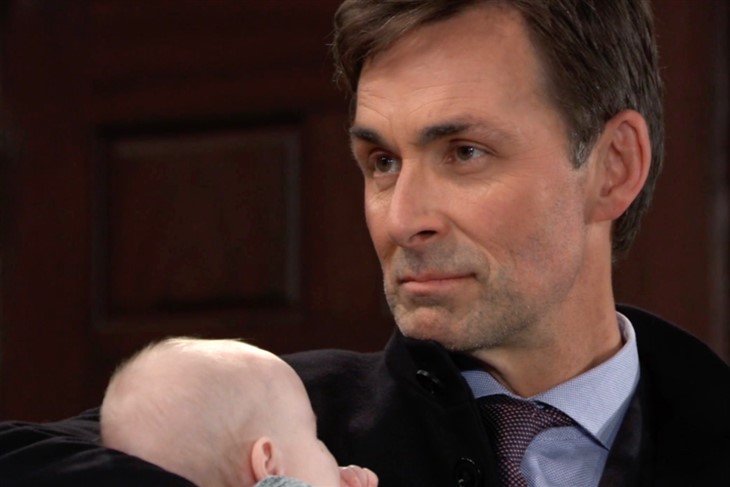 General Hospital viewers will recall that Valentin “lost” Bailey – who he never really was the birth father of –when Brook Lynn Quartermaine (Amanda Setton) admitted she’d scammed him for ELQ shares. Then Harrison Chase (Josh Swickard) stepped up as the baby daddy – still fake – but then Bailey is really Louise, hidden in plain sight all along anyway. Hidden, that is, until Peter apparently figures it out and somehow snatches her from under the watchful eyes of Brook Lynn and Chase, who is on suspension from the PCPD for slugging Valentin!

But for at least a couple of months, Valentin was the adorable baby girl’s father in every way that counted, and he shed many bitter tears when he found out he wasn’t her daddy. But that doesn’t mean the love isn’t still there! General Hospital viewers will recall that bluffing or not, Peter did hint to both Maxie Jones (Kirsten Storms) and Port Charles Chief of Detectives Mac Scorpio (John J. York) that he knew where Louise was and he’d get her! Did he manage to hypnotize Yuri (Cyrus Hobbi) or something?

General Hospital viewers know that there is no line that Peter won’t cross – he’s not even the least bit worried about even Sonny Corinthos’ (Maurice Benard) threats. General Hospital viewers saw that Sonny was determined to end Peter once and for all for killing Jason Morgan (Steve Burton) and that was a promise, not a threat! There is a possibility that somehow Peter gets to Drew Cain (Cameron Mathison) and reactivates him to kidnap Louise if he figures out she’s living as Bailey, but he’s got to get out of that jail cell first!

However, Peter may still have other partners in crime that might not only be working with him even now, but possibly be able to break him out of jail! General Hospital viewers will recall that one of Peter’s former partners in crime, also currently behind bars, still has his “contacts” which he made sure he knew Sonny knew when he called with his condolences for Jason – and how would he know about Jason unless Peter told him?

General Hospital viewers will recall Sonny had set up a news blackout so loved ones wouldn’t find out about Jason’s death before he had a chance to tell. That pretty much proves that Cyrus and Peter are still in cahoots! More than likely, they are in touch and have a mutual network of goons – perhaps the same fake cleaning lady that showed up at the safe house where Laura Collins (Genie Francis) and Martin Grey (Michael E. Knight) are might show up at the Quartermaine mansion as well!

There are many ways Peter could figure out that “Bailey” is Louise and manage to have her snatched if he is not able to do so himself, although that would be the preferred method. General Hospital viewers know that Peter will kill anyone he has to who is standing between him and Louise, and that even means his former mentor Valentin Cassadine! Valentin may not be “Bailey’s” birth father but if she is in danger from Peter or anyone else, General Hospital viewers know that he would do anything to protect her!

Valentin may feel that he is making up for taking Peter from a loving home and placing him in the hands of a monster by ending the monster that Peter has become and rescuing baby Louise and returning her to Maxie! Maxie may be so grateful to Valentin that he’ll be allowed to stay in Louise’s life as a godfather or daddy figure and have access to the baby girl after all!