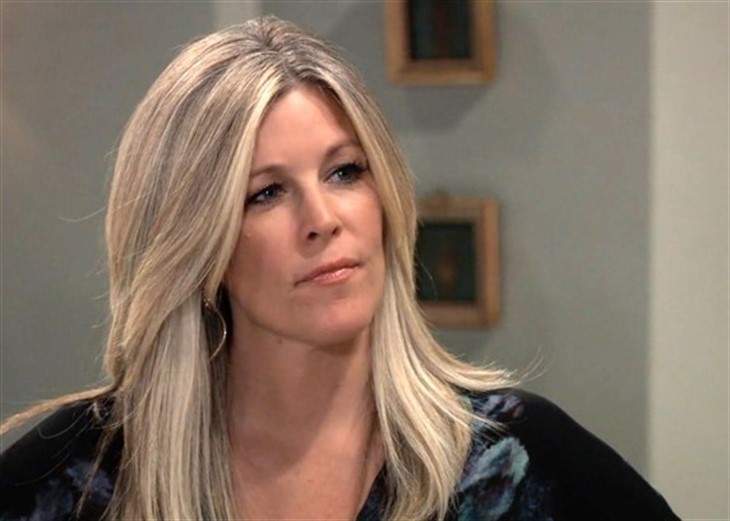 General Hospital spoilers show Carly is once again heartbroken over losing Jason again. Carly had allowed herself to fall in love with Jason once again. However, this time Jason had done the same. Carly and Jason had decided to have a real marriage only to be interrupted by Sonny Corinthos’ (Maurice Benard) return to Port Charles. When Jason was presumed dead years ago, Carly got into a relationship with Franco Baldwin (ex-Roger Hayworth) when he was thought to be Jason’s twin brother.

Carly may turn to Drew when the truth about Sonny’s relationship with Nina Reeves (Cynthia Watros). Could the two of them find comfort in each other’s arms? Drew blames himself for Jason’s death and could easily be swayed by Carly’s feelings? Will Carly and Drew sleep together to feel close to Jason?

General Hospital’s Drew feels guilty over Jason’s death. Monica Quartermaine (Leslie Charleston) has offered absolution to Drew over Jason’s death. Jason gave his life to save his brother. Jason knew the risk he was taking going up against Peter August (Wes Ramsey). However, Jason wanted to get his brother home as well as Britt Westbourne (Kelly Thiebaud) and Liesl Obrecht (Kathleen Gati).

However, thanks to Peter, the tunnel collapse killed Jason while everyone else survived. Drew needs to talk to someone who understands and Carly is probably the only person who does. Will Carly and Drew lean on each other now that she’s upset with Sonny?

General Hospital’s Carly tends to make choices that leave her in trouble. Carly doesn’t have Jason around to do damage control. Carly almost married Franco because it made her feel close to Jason. How far will Carly go with Drew? Would Carly consider leaving Sonny to marry Drew? Has Sonny changed too much to stay in the life he used to live? Does Carly miss what she had with Jason so much that she needs to be with someone connected to him? Has Carly falling in love with Jason changed everything in her world too much to stay with Sonny?

Carly could push Sonny into Nina’s waiting arms by turning to Drew. Will this be the end of Carly and Sonny? Will Drew make Carly feel any closer to Jason? Is Drew ready to be a substitute for Jason once again?