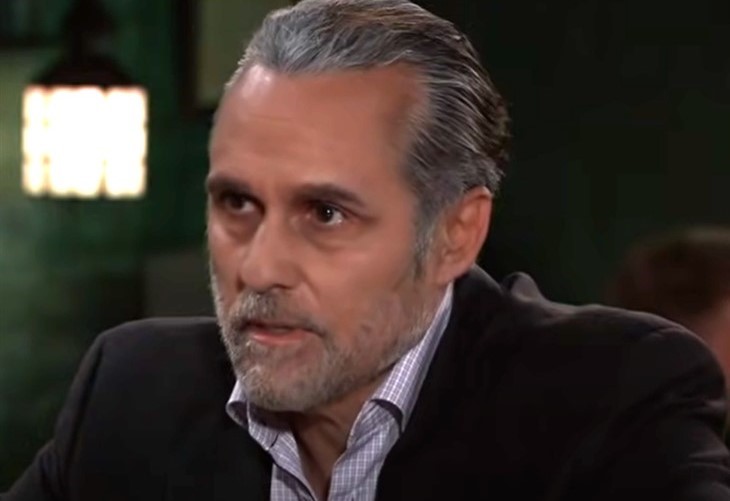 When you’re a hissing cartoon villain whose ex-girlfriend still has the upper hand because she knows you have no idea where your baby is, you’re likely no match for Sonny Corinthos (Maurice Benard), mobster extraordinaire.

Being responsible for the death of Jason Morgan (Steve Burton) was not something Peter (Wes Ramsey) thought could truly hurt him because he pretty much forgot Sonny existed. Carly Corinthos (Laura Wright) already smacked him across his mustache-twirling face and now Sonny is there to tell him that since he killed Jason, all rules go out the window.

Of course, Peter makes threats and all Sonny can do is laugh in his pathetic face. We are sure the audience will be laughing in his face too. Perhaps Peter’s time is really up. We can only hope….

Now that Willow Tait (Katelyn MacMullen) knows there was more than friendship between Sonny and Nina Reeves (Cynthia Watros) in Nixon Falls, she is not quite sure what to do with that information, so she just tells Nina that she knows although we don’t know for what purpose.

As expected, Nina begs her not to say anything to Carly and Michael (Chad Duell), but Willow can’t and won’t make any promises. So, Nina wants to know what exactly Willow plans to do now that she has this big secret to keep. Will she try to get an upper hand in the Nina and Wiley situation?

Maxie Jones (Kirsten Storms) is also still creeped out after her encounter with Peter, as are we. She mentions it all to Austin (Roger Howarth). Does Austin mention how he stabbed Peter twice in the arm while trying to draw blood? We enjoyed that.

Elsewhere in the hospital, Michael Corinthos is more interested in Brando Corbin (Johnny Wactor) and Sasha Gilmore (Sofia Mattsson) than Willow as he offers support while they worry about their baby.

Carly is also all involved with Sasha’s storyline as she listens to Gladys Corbin (Bonnie Burroughs) lament all of her past sins and Carly is just mean to her because she is Carly. Stay tuned to General Hospital weekdays to see how these stories play out.