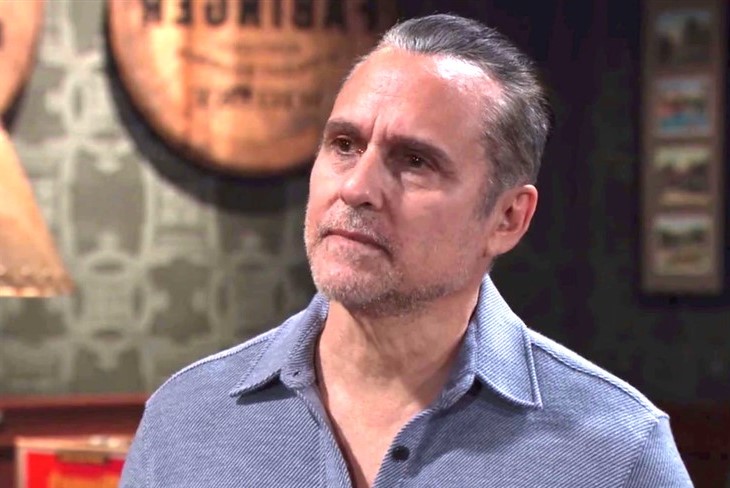 General Hospital (GH) spoilers tease that Sonny Corinthos (Maurice Benard) will call in Damian Spinelli (Bradford Anderson) to help in a desperate search for Jason Morgan (Steve Burton) after he receives a disturbing call in an upcoming episode of General Hospital!

General Hospital viewers will see that Sonny and Carly Corinthos (Maurice Benard, Laura Wright) are already at General Hospital when Britt Westbourne (Kelly Thiebaud) and Liesl Obrecht (Kathleen Gati) are brought in for treatment. The Corinthos couple are there to support Gladys and Brando Corbin (Bonnie Burroughs, Johnny Wactor) and Sasha Gilmore (Sofia Mattsson) after Sasha went into labor and suffered placental abruption. Baby Corbin is in a specialized bassinet in the NICU to keep his brain from swelling, because he was without oxygen for a few minutes before being born by emergency caesarian section.

Sonny is in another part of the hospital encouraging Brando while Carly sees Britt and Liesl brought in, minus Jason. Carly rushes over to Britt, who is in shock and asks after Jason. General Hospital viewers saw that Drew Cain (Cameron Mathison) went to Jason’s old penthouse to give Sam McCall (Kelly Monaco) and Dante Falconeri (Dominic Zamprogna) who was also there at the time, the bad news about Jason.

While still at the NICU with Brando, Sonny will receive a disturbing call – someone will give him the bad news that Jason is presumed dead. This may be while Carly is downstairs trying to get info from Britt, who is likely too much in shock and is unable to speak about it. General Hospital viewers know that Carly wouldn’t call if she knew, she’d rush to Sonny in person. This could be a call from Drew, Sam or Dante, although it likely might be from Dante. Drew delivered the bad news in person because that is just what military people do, but he is also in shock and likely blames himself although he tried to get the rubble off Jason.

The tunnel had started to collapse more and Anna Devane (Finola Hughes) had told him they needed to get out, and a specialized search and rescue team from the WSB would take over. Their electronic equipment had found no sign of life. General Hospital viewers know Drew didn’t want to leave without his brother! The two of them had really bonded, finally, down in that tunnel! Drew goes over to the Quartermaine mansion after giving Dante and Sam the bad news to inform the rest of the Quartermaines in person.

General Hospital Spoilers – Sonny Corinthos Knows That An Exhaustive Search Didn’t Find Him, He Has To Try Harder To Find Jason Morgan

General Hospital viewers will recall when Sonny went missing and was presumed dead, there was an exhaustive search for him, including by Jason, and they didn’t give up easily. The WSB and FBI were even called in and Sonny was never found – yet he had either washed out of or walked out of the river between New York and Pennsylvania, winding up in a snowdrift nearly frozen by the time Pennsylvania State Trooper Ralph Finchley (Channing Tatum) had found him. Yet, he was alive although barely by that time! His suit coat and ID and cell phone, along with his wallet, were never recovered. General Hospital viewers know Sonny knows firsthand how someone can be somewhere alive – Jason could be injured and have amnesia like he did!

Sonny calls Damian Spinelli (Bradford Anderson) and first gives him the situation, getting all the information that he can as to what happened and where. Spinelli, of course will be shocked and grieved, but he, like Sonny, will not give up on finding Jason, alive or not, and will use all the cybersleuthing tools available to him to try and find Jason’s location and if he is really buried in the rubble of the tunnel!