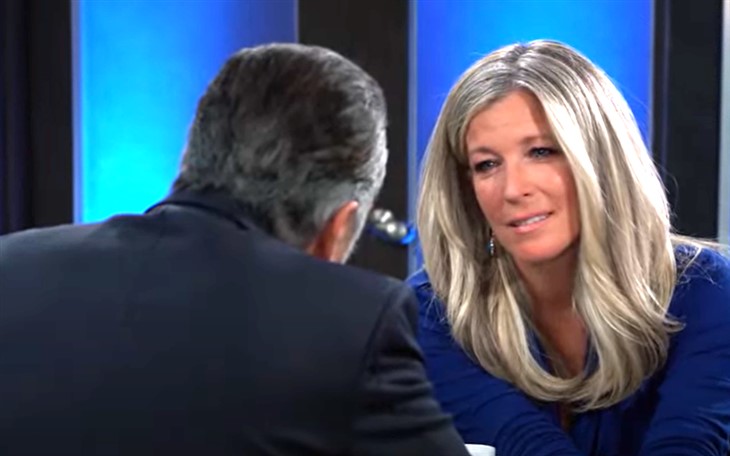 General Hospital (GH) spoilers indicate that Drew Cain (Cameron Mathison) has returned home and is about to deliver devastating news to the Quartermaines and Jason Morgan (ex-Steve Burton) loved ones. Will Sonny Corinthos (Maurice Benard) and Carly Corinthos (Laura Wright) reconnect over their loss?

General Hospital’s Sonny hasn’t been home long as all. Sonny and Carly have decided to move on with their marriage and Jason left town to give them space. Jason needed a distraction himself and had it for a while. However, Jason was taken hostage and chained up with his brother before they tried to take out Peter August (Wes Ramsey).

Now Jason has been buried in the rubble of the Cassadine tunnels in Greece and is presumed dead on General Hospital. Carly could easily blame herself for going back to Sonny, however, it seems that Carly and Sonny will bond over this instead. Will Sonny and Carly get their marriage back on track? Has Jason brought his best friends back together?

GH Spoilers – Sonny And Carly Corinthos Will Be Devastated

General Hospital recaps show Sonny and Carly have lost Jason before, but this time could be final. The most sensitive equipment that the WSB possesses has found no signs of life. The last time Jason disappeared like this he was gone for five years before he returned.

Unfortunately, that may not be the case this time. With Steve’s exit again and the reason behind it, GH spoilers tease Jason may not be back home. A recast may be possible but Jason hasn’t been the same since Steve left in 2012. Can Sonny And Carly survive losing Jason again? Is Jason gone for good this time?

General Hospital Spoilers –  Sonny And Carly Corinthos Lean On Each Other

General Hospital’s Sonny and Carly will lean on each other because no one else knows what they are going through. For years it was just the three of them. Jason has been there for both Sonny and Carly and they have been there for him. Carly has deeper feelings for Jason than she wants to admit. Sonny still considers Jason his best friend. Sonny and Carly have needed something to boost their connection.

Carly and Sonny’s grief over Jason may be what it takes to get Nina Reeves (Cynthia Watros) out of his head. Sonny and Carly are so connected to Jason that they couldn’t possibly lean on anyone else. Jason wanted his friends to reconnect but didn’t want his death to be the reason. However. Sonny and Carly could not mourn Jason any other way.