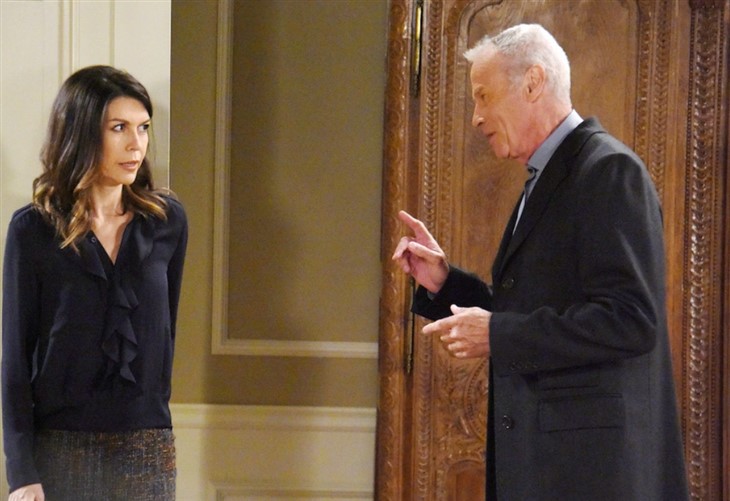 General Hospital (GH) spoilers tease that Peter August (Wes Ramsey) believes that he has taken care of all the loose ends with regards to his time at Cassadine Island. He has control of Drew Cain (Cameron Mathison) and plans to send Drew to Port Charles to bring Maxie Jones (Kirsten Storms) back to him. He is forcing Dr. Leisl O’Brecht (Kathleen Gati) to help him by bending Maxie’s will to basically force her love him whether she wants to or not. He also has Dr. Britt Westbourne (Kelly Thiebaud) and Jason Morgan (Steve Burton) in captivity.

But Anna Devane (Finola Hughes) and Robert Scorpio (Tristan Rogers) have located Peter and are on their way to finally bring Peter down once and for all. With Valentin Cassadine (James Patrick Stuart) helping to provide safe entry on the island, it seems as though help is on the way. But are their efforts going to be enough to get the drop on Peter, who has proven time and time again that he is as slippery as they come. Add to that the fact that Britt and Jason seem to have their own plans, it could be a recipe for disaster.

Anna is Peter’s aunt. For a while, she believed that she was Peter’s mother. But those memories of giving birth to Peter actually belong to Alex Devane (also Finola Hughes) thanks to the memory mapping program devised by Dr. Andre Maddox (Anthony Montgomery). Anna spent months protecting Peter, believing that he was trying to better himself. But eventually Anna realized that Peter was as bad as his father, Cesar Faison (Anders Hove). But she had let Maxie fall in love with Peter, and Maxie didn’t realize how evil Peter was until she was pregnant with his child. Anna feels responsible,

Robert is also highly motivated to bring Peter down. He isn’t nearly as sentimental as Anna. But now that Valentin has given them access to Cassadine Island, both Anna and Robert are on the same page. But can they stop Peter and give Maxie the security she needs to move on with her life?

Will Robert and Anna finally get the drop on Peter? Can Peter be stopped? Will everyone make it off Cassadine Island alive? Anything can happen in Port Charles so stay tuned to General Hospital airing weekdays on ABC. And don’t forget to check back right here regularly for all your General Hospital news, information and spoilers!