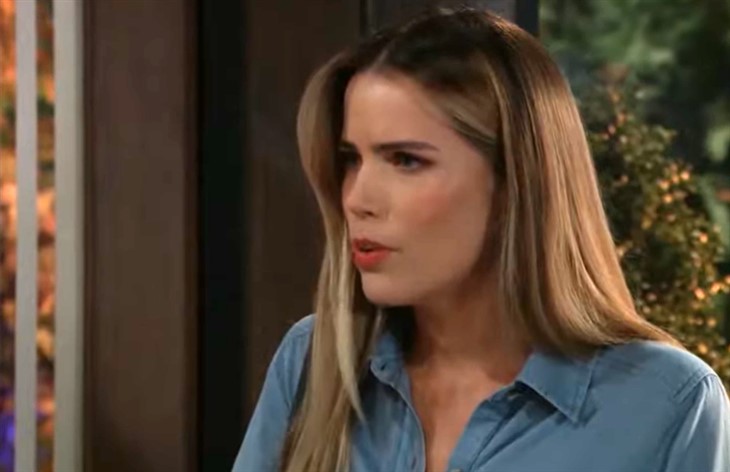 General Hospital (GH) spoilers for Friday, November 19, 2021, reveal everything happening at once in the middle of a November sweeps month to remember. Everyone is in danger both in and out of Port Charles and heartbreak may be about to occur.

Something is going wrong with Sasha Gilmore’s (Sofia Mattsson) labor and Elizabeth Webber (Rebecca Herbst) is extremely alarmed. We’re not sure why she was allowed to have a slow labor after her water broke when women are often given something to speed things up at this point, so if Sasha’s baby does die, she should sue General Hospital and whoever decided this labor could take its sweet time.

She did have quite the idyllic pregnancy, so that should have been a warning shot to all that something was definitely going to go wrong.

GH Spoilers – Over On Cassadine Island…

Speaking of warning shots, Peter August (Wes Ramsey) is about to take more of them — and they all might not be as a warning. Now that Drew Cain (Cameron Mathison) is no longer under Peter’s mind control, Britt Westbourne (Kelly Thiebaud) and Jason Morgan (Steve Burton) think they can use him as a weapon. But, it’s much more likely that Peter will escape again since the writers think they hit villain gold with him when what they really have is a lump of coal.

As Brook Lynn Quartermaine (Amanda Setton) lies and cries with Valentin Cassadine (James Patrick Stuart), who demands to know if he is Bailey’s father or not, Chase (Josh Swickard) puts it all together and figures out that Bailey is really Louise. Will he save Brook Lynn from having to tell the truth by claiming paternity himself? Will any of this make any sense to Valentin? And will Peter ever be caught so we can truly end this horrible story sooner rather than later?

GH Spoilers – Maxie Jones Doesn’t Like Her Own Lies, Carly Corinthos Likes Her Own Voice

Sisters-in-law Maxie Jones (Kirsten Storms) and Nina Reeves (Cynthia Watros) share a few bonding moments as they commiserate over all the lies they told that they didn’t really mean to tell. The lies all just kind of happened and now they are paying the price for keeping way too many secrets.

They could just pull a Carly Corinthos (Laura Wright) and blame someone else for their problems. How about Peter? It’s not like Maxie wasn’t warned…by Nina.

Speaking of Carly, she is apparently all confused as to why Sonny Corinthos (Maurice Benard) keeps defending Nina after all she did to them. She asks Sonny to make it make sense. But it doesn’t even make sense to him. Stay tuned to General Hospital to see how these stories play out.