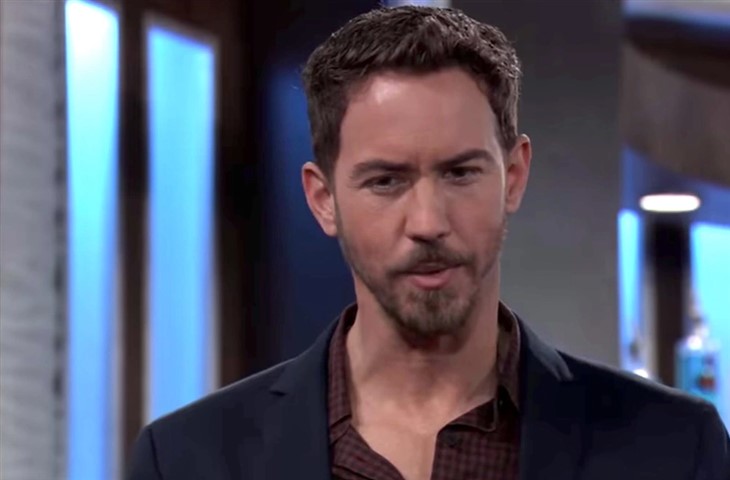 General Hospital (GH) spoilers pose the question as to if Peter August (Wes Ramsey) finally meets his maker, or if he beats death and survives again in upcoming episodes of General Hospital!

General Hospital viewers will recall that Peter was poisoned in Pentonville prison in a recent episode of General Hospital! There is a very good chance that Selina Wu (Lydia Look) is behind the poisoning, after making a deal with Sonny Corinthos (Maurice Benard) to ensure that her nephew, Brad Cooper (Parry Shen) will go free. Selina was to make sure Peter died while Sonny contacted a parole board member who’s apparently in Sonny’s pocket to make sure Brad is sprung.

General Hospital viewers will also recall that it was Brad who brought Peter his poisoned breakfast, and even though Peter was worried because of Sonny’s threats earlier, hunger won out over fear and he changed his mind about the meal! Peter collapsed in his cell shortly thereafter, and Anna Devane (Finola Hughes) gets a call about Peter’s poisoning. Since the type of poison will be unknown and an antidote may need to be found quickly, whether Peter survives depends on whether he is found alive or not, obviously, and whether he is merely put in the Pentonville infirmary or he is brought to General Hospital!

GH Spoilers – Maxie Will Wait For News At General Hospital

General Hospital viewers will recall that Maxie asked Sonny to put a hit out on Peter, and to Maxie, he declined and said Peter needs to live – Peter had threatened to expose his and Nina Reeves’ (Cynthia Watros) affair of the heart in Nixon Falls. Sonny was a little nervous but more afraid he’d be implicated than of Peter’s threats! That’s why he handed off the hit to Selina!

More than likely, Maxie is waiting at General Hospital for news on Peter – she’ll want to know if he lives or dies, and if he lives, if he is still a threat or if he’s in a coma or something keeping him immobilized. He is likely found still alive but since the poisoning took place in Pentonville, it makes sense for him to be brought to General Hospital for treatment. If he were left in the Pentonville infirmary, whoever poisoned him in the first place could go ahead and finish the job, and Anna wants him to pay for his crimes alive, not dead!

General Hospital spoilers also tease that Dr. Austin Gatlin-Holt (Roger Howarth) will give Dr. Britt Westbourne (Kelly Thiebaud) an update on a person of interest around the same time Maxie is waiting for news at General Hospital. General Hospital viewers know that this patient could be Britt’s mother, Liesl Obrecht (Kathleen Gati) but it could also refer to Britt’s half-brother Peter! Britt is not afraid of Peter but would be interested in knowing that someone poisoned him and that he’s back at General Hospital for treatment.

Austin has some interest of his own, wanting to protect Maxie from her ex, and there is no love lost for Peter on Austin’s part. Austin took great pleasure in some sloppy phlebotomy in a recent episode of General Hospital, where he poked Peter in the arm far away from the vein from which he was supposed to take a blood sample! Austin may get a chance to do that again since likely Peter will need lab tests to determine what poison he was poisoned with – ooh, Austin may even have a chance for even more fun by misdirecting a catheter!