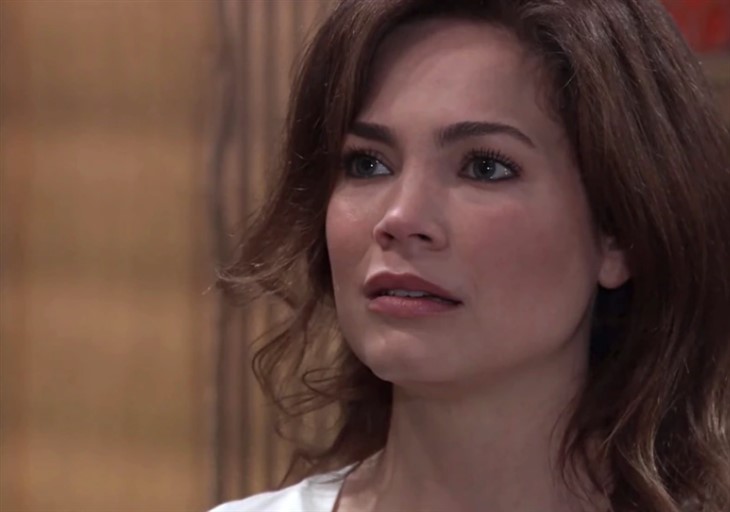 General Hospital (GH) spoilers for Tuesday, December 14, 2021, reveal Elizabeth ready to do whatever everyone in Port Charles and at home watching wants her to do, but will she actually be the one to finally complete this darn mission?

If anyone has the motivation and the right to end the misery and albatross around General Hospital’s neck that is Peter August (Wes Ramsey), it’s Elizabeth Webber Baldwin (Rebecca Herbst), the woman whose husband Peter shot at point-blank range and killed in cold blood back in March. We have barely seen Elizabeth even grieve poor Franco (Roger Howarth) on screen but we know she wants Peter dead considering she willed herself not to find a pulse on him after Hamilton Finn (Michael Easton) threw him down the stairs over the summer.

So, as Peter lays there in a coma, Elizabeth stands over him with a scalpel and we all hold our collective breaths, willing her to just do it before someone walks in. Since we’re sure we won’t get so lucky, it’s a good bet that Finn walks in and does the upstanding thing and stops her, despite his actual wishes.

However, that doesn’t mean half the town isn’t praying he just dies from those poisoned eggs, including Austin Holt (also Roger Howarth), who delivers the good news to Britt Westbourne (Kelly Thiebaud). And, of course, Maxie Jones (Kirsten Storms), who feels she can end this baby witch charade if Peter actually dies.

Brad (Parry Shen) is the one who delivered those poison eggs to Peter, so we want only the best for him, which means we want him out of jail so he and Britt can make us laugh again. But Michael Corinthos (Chad Duell) doesn’t want that at all and attends Brad’s parole hearing with Willow Tait (Katelyn MacMullen), telling her he was never so sure he wanted anyone to stay in jail in his life.

Willow is starting to see that Michael is one angry young man and if you cross him he will likely hold a grudge for life. (That is, unless you murder his biological father and cover it up. Then, that’s ok.)

Aunt Stella (Vernee Watson) is back in town and knows something is up with her nephew, considering that TJ Ashford basically told her as much, but refused to tell her what’s really going on.

So, she stops by The Savoy to see for herself and pry. That’s when she spots Marshall Ashford standing there in the corner and knows exactly what’s going on. Did Stella know he was alive all along? Stay tuned to General Hospital spoilers to see how these stories play out.