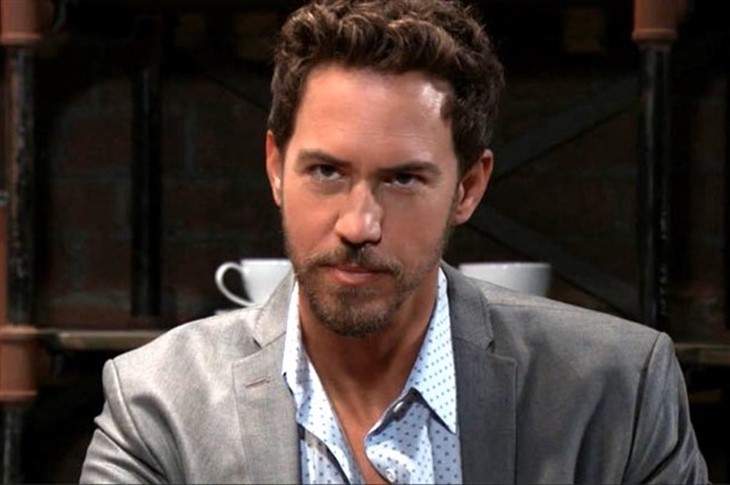 General Hospital (GH) spoilers tease that unfortunately for some General Hospital fans, it’s not quite the end of Peter August (Wes Ramsey)! He escapes death once again on Cassadine Island!

General Hospital viewers will recall that Jason Morgan (Steve Burton) thought he’d figured out how to take Peter August down for good! He and Drew Cain (Cameron Mathison) were both chained up in the dungeon beneath the Cassadine castle in Greece and he’d figured out how Peter activated Drew’s programming with one tarot card, and deactivated with another.

With the showing of the cards were commands – the one for deactivation was “stand down”. When Drew had found out what he had done when activated, he wanted Jason to kill him but Jason said it wasn’t necessary and explained how the activation and deactivation process worked. Even so, it looks like in spite of any efforts that Drew and Jason are able to make, the slippery, slithery Peter will once again make his escape! General Hospital viewers have noted that sometimes he even hisses like a snake when he makes his threats!

General Hospital viewers will note that there are still Louise August (Harper and Scarlett Bloom) and Liesl Obrecht (Kathleen Gati) to find. Britt Westbourne (Kelly Thiebaud) is still on the island but Peter has had her captive as well! Back in Port Charles, Louise is still hidden in plain sight as “Bailey Lois Quartermaine” although at least part of her cover seems poised to be blown by Gladys Corbin (Bonnie Burroughs)! Valentin Cassadine (James Patrick Stuart) will soon find out Brook Lynn Quartermaine (Amanda Setton) lied about his being the baby’s father, although he seems to have a pretty good idea thanks to conversations with Dr. Austin Gatlin-Holt (Roger Howarth) and Gladys that BLQ has been scamming him about something!

General Hospital viewers noticed Detective Harrison Chase, (Josh Swickard) back on active duty at the Port Charles Police Department, is also onto the secret about baby “Bailey”. After BLQ gets busted in a very public way about the baby’s paternity, he’ll step in and play daddy in an up close and personal way. She and Maxie Jones (Kirsten Storms) may even tell him the truth about “Bailey” and he’ll understand why they did what they did. Meanwhile, Scott Baldwin (Kin Shriner) will interrogate Victor Cassadine (Charles Shaughnessy) about the whereabouts of his beloved missing “schnitzel”!

General Hospital viewers know that Peter may figure out on his own that his baby is being hidden in plain sight, and his spies back in Port Charles may report back to him that Brook Lynn and Maxie have formed an unusual friendship! He may figure out that Valentin’s “youngest daughter” is actually his, and then the threat will move from those still imprisoned on Cassadine Island to Port Charles! Britt may have to play along with Peter in order to keep herself alive, and continue to try to somehow get her injured mother back home and free Drew and Jason besides; this may also give her an opportunity to access a phone to get a warning to Maxie! Either way, it doesn’t look like General Hospital fans are going to be rid of Peter that easily! Eventually he’ll be put out of everyone’s misery for good, though!