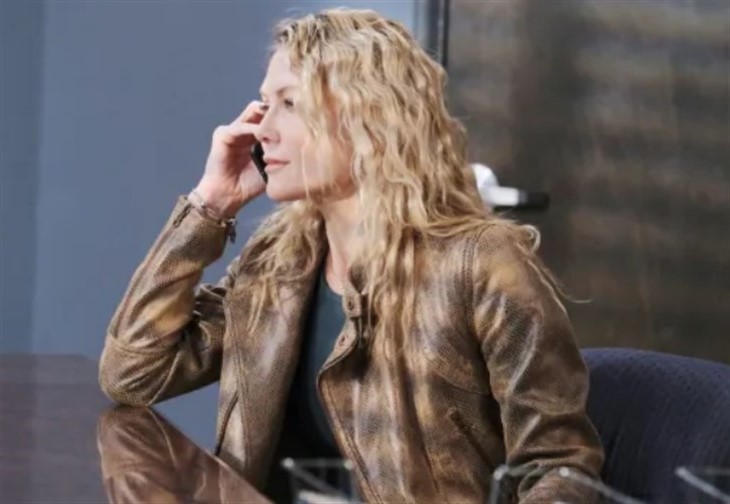 Days of Our Lives spoilers reveal that the Kristen DiMera who is hanging out at the police station played by Stacy Haiduk, is driving a hard bargain with Gwen Rizczech to get her to do what Kristen wants.

Gwen (Emily O’Brien) certainly wasn’t planning on meeting up with Kristen DiMera while in the Salem PD interrogation room and never thought she’d be asked to break the crazy woman out of there. Gwen is in enough trouble with enough people so she certainly doesn’t want to get involved with Kristen. Except Kristen lets Gwen in on a little secret. She knows exactly where Sarah Horton (Linsey Godfrey) is.

This makes Gwen’s ears perk up. She knows she wouldn’t have Xander Kiriakis (Paul Telfer) in her life if Sarah and Xander had ended up getting married. Now she learns from Kristen that Sarah never had an affair with Rex Brady (Kyle Lowder) and didn’t run away from Salem — Kristen donned a Sarah mask and kidnapped her. And she knows exactly where Sarah is and can bring her back from exile and send her right into Xander’s life once again.

However, if Gwen does what Kristen says then Sarah can stay where she is and Xander never has to know what really happened to his precious Sarah. Kristen suggests it would be a win-win for both of them, right?

DOOL Spoilers – Will Gwen Rizczech  Do The Right Thing?

Gwen already has Jack Deveraux (Matthew Ashford) kicking her out of his life just as they were starting to get close as father and daughter. He knows about all her secrets and lies and she wants to make things up to him and show him she’s changed, but she also doesn’t want to lose Xander and feels if Sarah is back, then that’s exactly what is going to happen.

Xander just told her he loves her and they could have the life she’s always dreamed of together if she just does this one little thing for Kristen, but will she do it? She risks never having Jack forgive her — and if Xander finds out, he won’t forgive her either. Stay tuned to Days of Our Lives weekdays to see what Gwen does.