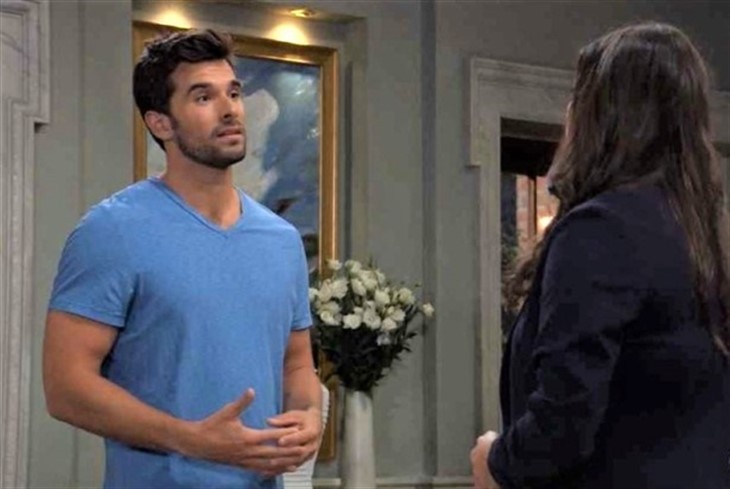 General Hospital (GH) spoilers for Monday, November 15, 2021, reveal Brook Lynn trying and failing to get Harrison Chase to believe her whole story. But will he figure out the absolute truth?

How much did Chase (Josh Swickard) really hear when Brook Lynn (Amanda Setton) was talking to Gladys Corbin (Bonnie Burroughs)? Did he hear about Valentin Cassadine (James Patrick Stuart) not really being Bailey’s father and does he gather by his last conversation with Valentin that Brook Lynn might not be the baby’s mother?

As Brook hems and haws to try to throw Chase off the scent that will lead him to the truth, she tries to play upon their friendship that might be developing into something else? Will Chase fall for this Nelle ploy or will he wise up after being played one too many times? Not that Brook wants to play him — she just feels she has to.

Meanwhile, Valentin is recovered and ready to leave the hospital but he tells Anna Devane (Finola Hughes) he might have to make a deal with the devil to get to the truth. (Maybe he should head on over to Salem.)

Or, he could just go to the PCPD where Victor Cassadine (Charles Shaughnessy) is waiting to be arraigned — and gets a surprise lawyer in Scotty Baldwin (Kin Shriner).

It looks like Austin Holt (Roger Howarth) still wants Gladys to spill some more tea so he invites her to the show at Ava’s gallery and she turns him down. Brando Corbin (Johnny Wactor) wants to know why his mother would turn down such a nice invitation.

At the gallery, Esme Prince (Avery Pohl) is ready to cause trouble and Ava Jerome (Maura West) can tell that something is about to go wrong at any moment. Esme has already shown she is a very angry young woman who is capable of almost anything if she thinks she is being wronged.

Over at The Savoy, Curtis Ashford (Donnell Turner) confronts the man who’s been following him around and demands to know who he is. Are we about to hear a version of “Luke, I am your father?” Stay tuned to General Hospital weekdays to find out.