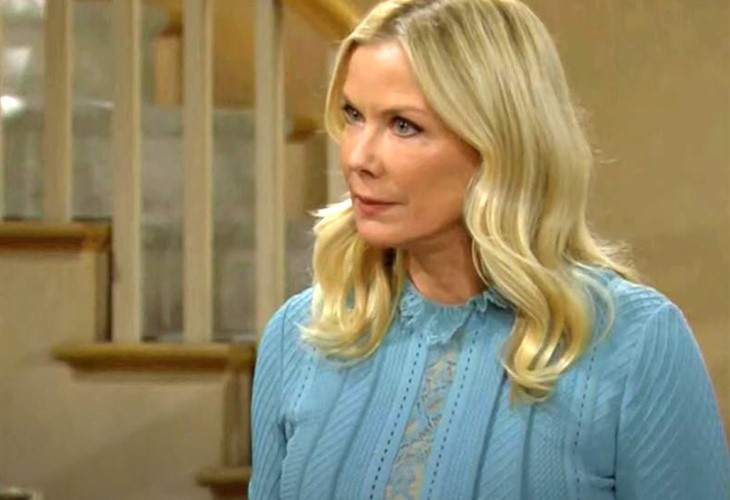 Longtime viewers of The Bold and The Beautiful will recall that Brooke has been overbearing and confrontational from the get-go, especially when it comes to her men, but now she’s getting into the same mode with her step-grandchildren! Viewers of the Bold and The Beautiful know that Brooke is not even related to Thomas Forrester (Matthew Atkinson) and Steffy Forrrester’s (Jacqueline Macinnes Wood) children, she’s only a step-grandparent. But she claims Ridge Forrester’s (Thorsten Kaye) grandchildren as her own, even though she certainly doesn’t extend that attitude to Steffy, and certainly not to Thomas!

Brooke has some nerve as she antagonizes Taylor with her push to fight for custody of Douglas and Hayes, and may even antagonize her own daughter, Hope Logan Spencer (Annika Noelle)! Brooke apparently doesn’t feel that Hope can protect Douglas from Sheila either! Brooke is going way, way, overboard with her thinking that she could protect Ridge’s grandchildren by taking custody of them! She’ll antagonize Thomas and Steffy as well, and Hayes’ father, Dr. John “Finn” Finnegan (Tanner Novlan)!

Viewers of The Bold and The Beautiful can imagine that Brooke would worry that Taylor’s fallen for Sheila’s schemes when it gets back to her that Steffy allowed Taylor to convince her and Finn, and even Thomas, to allow Sheila to participate in their family Christmas at the cliff house. Sheila was even allowed to hold Hayes, although both Steffy and Thomas had a hard time watching it, as did Finn. But as viewers of The Bold and The Beautiful will recall, Taylor explained herself to Steffy and Finn, although Thomas wasn’t there at the time.

She wanted the chance to psychoanalyze Sheila when she was off guard to determine whether Sheila was still a threat, or whether she really had changed, as she’s claimed. Brooke will push the envelope with Sheila, however, and it will bring Sheila’s true colors out as she sets up Brooke for a drunken one night stand with Deacon Sharpe (Sean Kanan) by switching faux champagne for the real thing at a New Year’s Eve party!

Viewers of The Bold and The Beautiful can just imagine how antagonized and offended Taylor will be at Brooke’s unmitigated gall! Brooke’s maneuver to keep Taylor’s grandchildren safe from Sheila is not only an overreach, considering Sheila would have no interest in Douglas, but an insult to Taylor professionally! Such a move implies Brooke doesn’t trust Taylor’s professional judgment regarding whether Sheila has reformed or if she’s still a danger – although perceptive viewers of The Bold and The Beautiful may have noticed tears in Taylor’s eyes seeing the gentle way in which Sheila reacted to Hayes and when she held him.

At that moment, Sheila was just another grandma with her grandbaby, not a psychotic killer and kidnapper with a gun trying to make off with him! The newfound friendship between Brooke and Taylor will definitely come to a bitter end when Brooke goes overboard with her efforts to protect Ridge’s grandchildren this time – makes her wonder why she hasn’t tried to get custody of Beth and Kelly Spencer (River Davison, Avalon and Colette Gray) as well!