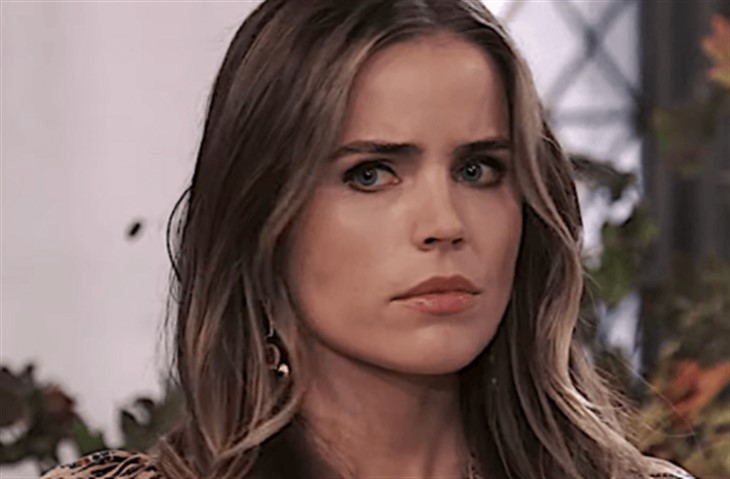 General Hospital (GH) spoilers for Friday, December 17, 2021, reveal more heartbreak for Sasha, Brando, and the audience as Sasha finally has to make up her mind about what to do about her poor baby.

After weeks (in real-time, not soap time) of Sasha Gilmore (Sofia Mattsson) and Brando Corbin (Johnny Wactor) trying to remain optimistic about their baby, they finally got the news they didn’t want to hear. Brando has been more realistic and accepting about it than Sasha, but she finally has to come to terms with the fact that her little boy will never have a real-life because he has no brain function.

As Sasha finally faces facts, she asks Brando if she will ever know for sure that she did the right thing and hearts just break some more. The two are there to support one another through this tragedy that makes absolutely no sense and must be horrible for Sofia Mattsson to portray on screen considering she has a newborn at home in real life.

When Carly Corinthos (Laura Wright) and Olivia Quartermaine (Lisa LoCicero) witness a close moment between Sonny Corinthos (Maurice Benard) and Nina Reeves (Cynthia Watros), Olivia realizes she has to run interference and try to talk Carly down from the ledge. Carly demands to know what she was really seeing and asks Sonny if it’s over between them.

Things haven’t been the same since he’s been back and Carly might finally be realizing why. Certainly, Carly marrying Jason (Steve Burton) and admitting she was in love with him couldn’t have been the problem at all.

Sometimes it feels like Drew Cain (Cameron Mathison) is going to be the new Jason Morgan once again except this time we get to call him Drew Cain from the start. Sam McCall (Kelly Monaco) brings Scout to see Drew on Friday and the two bond.

Elizabeth Webber (Rebecca Herbst) has yet to see Drew and he was a man she nearly married when he was going by the name Jake Doe. He was also her late husband’s best friend. On Friday, she still doesn’t see Drew, but she has a very strange interaction with Britt Westbourne (Kelly Thiebaud). Stay tuned to General Hospital weekdays to see how these stories play out.

Days Of Our Lives Spoilers: Xander Can Barely Believe What He Hears