Days Of Our Lives Spoilers: Xander Can Barely Believe What He Hears 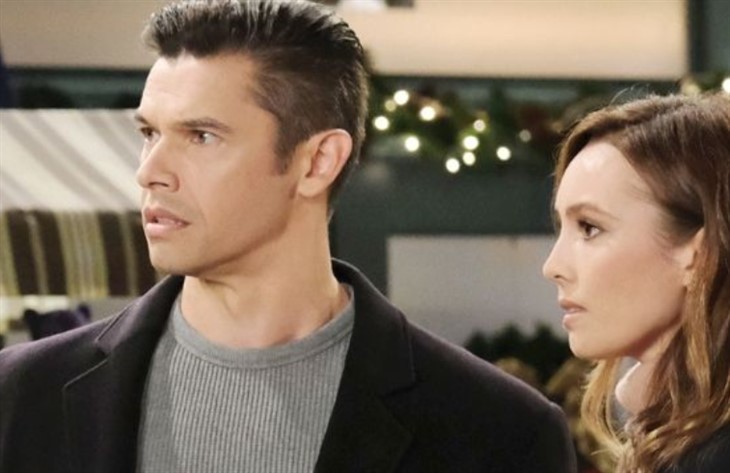 Days of Our Lives (DOOL) spoilers for Friday, December 17, 2021, reveal Gwen’s plan to skip town backfiring on her as Xander sees Rex and all hell breaks loose.

Gwen (Emily O’Brien) really did think she could get Xander Kiriakis (Paul Telfer) on a vacation to London before he could spot that Rex Brady (Kyle Lowder) was back in town. As far as Xander believes, Rex is off with Sarah Horton (Linsey Godfrey) somewhere out there because he was tricked into thinking she slept with Rex and took off on Xander on their wedding day. This is all thanks to Kristen DiMera (Stacy Haiduk).

However, Gwen couldn’t get Xander away from Horton Square fast enough and he indeed runs into Rex and demands to know where Sarah is. When Rex tells him he has no idea and that he never slept with Sarah earlier this year, Xander is going to have a whole lot more questions. Will Rex have the answers and will Xander realize that Gwen knew what was going on all along?

DOOL Spoilers – Kate Roberts Gets Quite The Shock

Of course, Philip Kiriakis (Jay Kenneth Johnson) is perfectly fine and of course, he set Brady Black (Eric Martsolf) up. He’s been losing his mind for months, so this seemed logical. Now, Kate Roberts (Lauren Koslow) and Victor Kiriakis (John Aniston) have declared their son dead and Brady has been arrested. And there Philip is, sitting right on Kate’s bed. She is furious and can’t wait to hear what happened.

As for Brady, at least he has Chloe Lane (Nadia Bjorlin) by his side. She completely believes his story and that he absolutely did not kill Philip. Considering that Philip is alive, that is pretty obvious to the audience, too. But, why did Philip start acting like this? He’s never been a white knight and is often as much of a hot mess with Brady, but he’s not usually like this.

DOOL Spoilers say that MarDevil (Deidre Hall) has another surprise in store tomorrow. Has she done something to Philip to make him act more obsessive and possessive than ever? Stay tuned to Days of Our Lives weekdays to see how these stories play out.