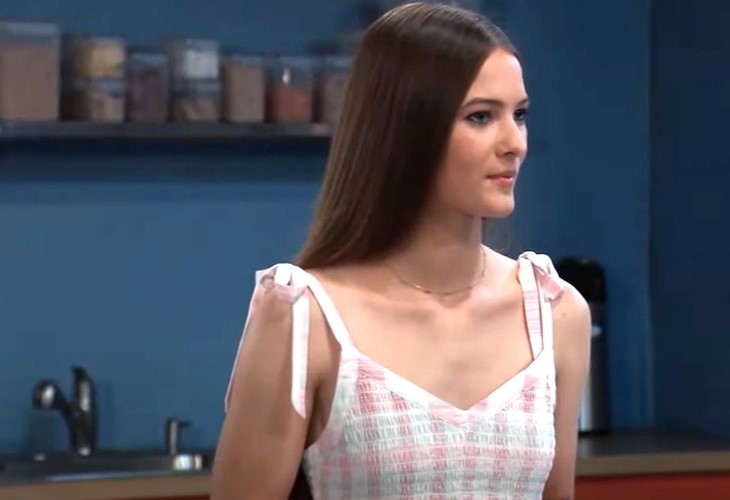 General Hospital (GH) spoilers tease that Esme Prince (Avery Kristen Pohl) has obviously come to Port Charles for more than to assist Spencer Cassadine (Nicholas Chavez) with his devious plan to break up Nikolas Cassadine (Marcus Coloma) and Ava Jerome (Maura West). She may have even nudged Spencer into his stalking plot from the beginning. But that seems to only be part of her long-term plan.

Esme is fixated on Ryan Chamberlain (Jon Lindstrom). She accompanied Spencer to Spring Ridge Prison while he has there to visit Alexis Davis (Nancy Lee Grahn). But while Spencer and Alexis caught up, Esme turned her attention to Ryan. Harmony (Inga Cadranel), who is working as an aide at Spring Ridge, warned Alexis that Esme is trouble. Harmony used to see troubled young women when she was a part of the Dawn of Day cult so she knows what she is talking about. But Harmony’s warning seem to be falling on deaf ears.

GH Spoilers – Esme Prince Gets One Step Closer To What She Wants.

Harmony is about to get a brand new co-worker at Spring Ridge. Esme has arranged to get her internship at Spring Ridge. Her next step will certainly be to take over Ryan’s care? While there hasn’t been any word from Esme herself, there is much speculation that she might be Ryan’s daughter. If that’s the case, Esme may be planning to help Ryan escape. But that won’t be easy considering Ryan’s current condition. Whether or not Esme has plans regarding Ryan depends on his condition.

Ryan suffers from a condition known as locked-in syndrome which occurred after he was stabbed in prison. Some people believe that Ryan is faking but there hasn’t been any kind of proof about that. If he is faking, then Esme might be his ticket out. But if not, it’s a sure thing that Esme will do whatever it takes to get closer to Ryan. This should be an interesting game of cat and mouse.

What are Esem’s plans? Does she plan to just get closer to Ryan? Or does she want to help him escape?