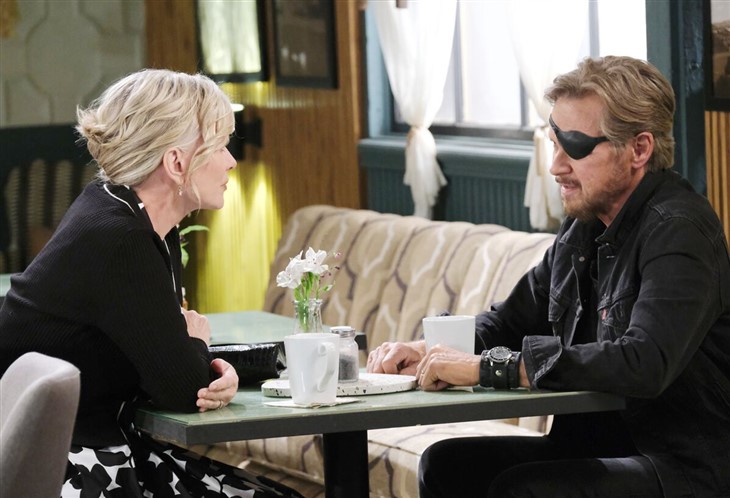 Days of Our Lives Spoilers tease that a possessed Dr. Marlena Evans (Deidre Hall) couldn’t hide her true self from John Black (Drake Hogestyn) for long. It didn’t take long at all for John to realize that something was off with his wife. So the devil revealed himself to John with plans to kill him. But Marlena was fighting the devil all the way, and was able to keep John alive. But she couldn’t have running around Salem revealing the devil’s presence. So she locked him up in the DiMera crypt with plans to finish John off later.

Days of Our Lives Spoilers – The Devil’s Plan For John Black!

The Devil plans to kill John. To account for his disappearance, she has already told Belle Black (Martha Madison) that John was out of town on a mysterious assignment. Later, she will receive notification that John was killed on assignment. MarDevil thinks she has everything covered. But she hasn’t taken Steve Johnson (Stephen Nichols) and his questioning nature into account. Steve is John’s partner in Black Patch, and his best friend as well.

Steve will have a hard time believing John would leave on a mission without him knowing anything about it. As John’s partner, Steve would likely know of any case that John was working on, especially one that would take him out of town. And as John’s best friend, if the case were more personal in nature, Steve won’t believe that he would leave without telling him? So matter how hard MarDevil tries to sell it, Steve will be a tough sell.

Days Of Our Lives Spoilers – Steve Johnson Will Investigate On His Own!

So look for Steve’s suspicions to be aroused. At first, he will believe Marlena was duped. But the more he questions her, the more he will start to suspect Marlena herself. And with all the talk about Marlena’s first possession, Steve will likely eventually come to the conclusion that history is repeating itself. Once he figures that out, Steve will realize that John is in great danger if he isn’t already dead. But he will have to be careful to stay one step ahead of MarDevil, so exciting times are coming!

Will MarDevil be successful in killing John? Or will Marlena be able to prevent it? Will Steve think Marlena’s story is suspicious? Literally, anything can happen in Salem so stay tuned to Days of Our Lives airing weekdays on NBC. And don’t forget to check back right here regularly for all your Days of Our Lives news, information and spoilers!